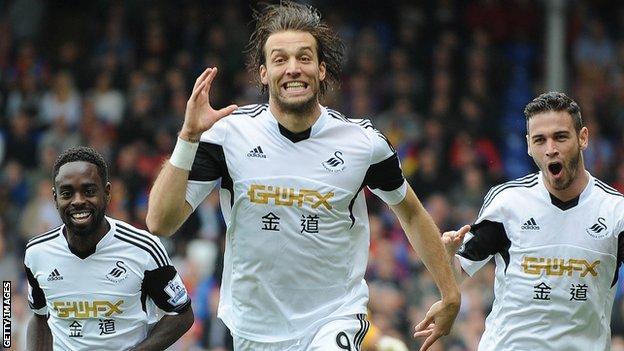 Swansea City striker Michu has been called into the Spain squad for the first time for the decisive World Cup qualifiers against Belarus and Georgia.

He replaces David Villa after the Atletico Madrid forward injured his ankle in a 2-1 win against Celta Vigo.

The 27-year-old was selected by Spain boss Vicente del Bosque ahead of Tottenham's Roberto Soldado and Juventus forward Fernando Llorente.

Spain are guaranteed to finish in the top two of their group, along with France, but the 2010 winners need four points from their remaining two home games to be certain of qualifying.

Atletico Madrid's Brazil-born frontman Diego Costa has switched allegiance to Spain, but they are yet to receive clearance to play him.

Del Bosque had suggested Michu would feature in Spain's friendly against Uruguay earlier this year but did not call him up.

The former Rayo Vallecano striker helped Swansea win the League Cup success last season and the goal he scored at Crystal Palace in a 2-0 win last month was his fifth of the season.