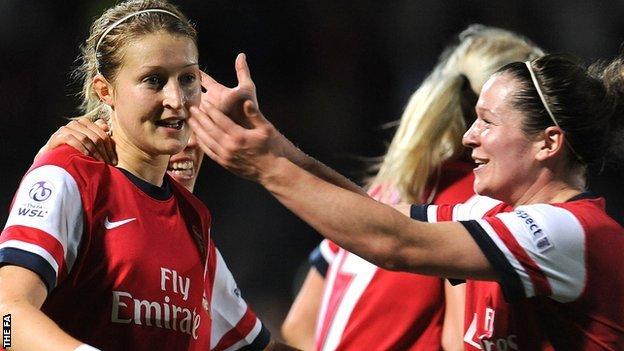 Arsenal will face Glasgow City in a women's football Battle of Britain if both teams come through their Champions League round of 32 ties.

The round of 16 draw, which has been made ahead of the first knockout round, threw up the possibility.

The Gunners have to beat SSHVSM Kairat of Kazakhstan and Glasgow must get past Standard Liege over two legs.

"I'd like Glasgow in the last 16," said Arsenal's Scottish manager Shelley Kerr ahead of Wednesday's first legs.

"But if that happens then national feelings and passion will be put aside, because I would want Arsenal to win the tie."

It's going to be a difficult task, but all we're thinking about at the moment is this first tie

Glasgow boss Eddie Woleckie Black refuses to speculate on possibly meeting Arsenal. "No doubt people are going to talk about a potential last 16 tie," he said.

"But it would be disrespectful to Standard Liege to even think about that as they are a good side and we should be focusing on them."

Britain's other representatives, Birmingham City, have been drawn against Finnish team PK-35 Vantaa in the Round of 32.

All three British clubs are away in their first legs, with the home legs set for the following week.

Blues and Glasgow both went out at this stage last season, while Arsenal reached the semi-finals before losing to eventual winners Wolfsburg.

The Gunners are in Europe for the 10th year in succession.

But they have missed out on qualification for next season through one route, a top two finish in the Super League, after ending the campaign in third place.

That means they have to become European champions this season, as they did in 2007, if they are to make it 11 successive years in the competition.

Kerr said: "It's going to be a difficult task, but all we're thinking about at the moment is this first tie."

Arsenal will be expected to reach the last 16 with no great problems.

But Kerr added: "Most of the Kairat players are in the Kazakhstan team, who lost narrowly to a good Finland side recently, so we can't take them lightly."

On Glasgow's tie, Black said: "We've had Standard watched a couple of times and have some DVDs of other games, so our research has been pretty thorough.

"We've got a plan worked out, but we know we'll have to play at a high level to come back home with a decent result from the first leg."

"We've got some scraps of information," he said. "Contacts have helped us get the basics about the team and the way they set up.

"But we'll be a lot more assured this season after our experience at this stage last year, when we won our home leg 2-0 but then lost 3-0 away.

"We didn't deserve to lose but it was a harsh lesson, and we'll be going to Finland a lot wiser about how to handle an away leg."

Birmingham will take on either Icelandic team Thor/KA or Russia's Zorkiy Krasnogorsk in the round of 16 if they beat Vantaa.