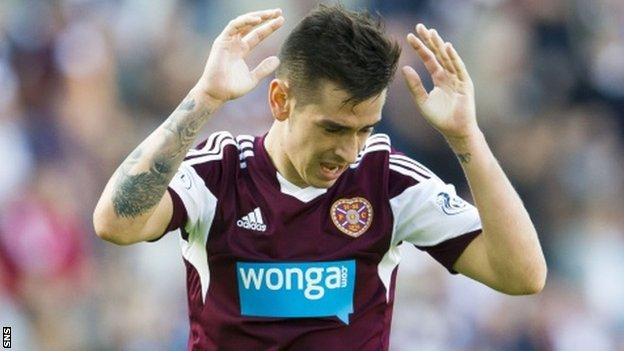 Jamie Walker admits is "a massive defeat" for Hearts and that the pressure of the occasion was too much for some of his team-mates.

Hearts missed a chance to move within six points of a side who started the day second bottom and with the future of manager Danny Lennon in doubt.

"The pressure maybe got to one or two of the boys," said winger Walker.

"We started the game well - it was probably the best we've started in a while - but we just fell away."

With St Mirren moving 12 points clear of Hearts after their 2-0 victory, Kilmarnock become the Edinburgh side's first target in the relegation zone after the Ayrshire side's .

"We can't let our heads go down and need to keep going," said 20-year-old Walker, who was Hearts' top performer at Tynecastle.

"We play Kilmarnock in two weeks and it's another big game and hopefully we can get a better result."

With having such a young team at the start of the season, it was going to be a big ask and, after that result, it's not going to be any different

Walker was booked for simulation after a challenge in the penalty box by Lee Mair before St Mirren opened the scoring.

Hearts have felt that refereeing decisions have not gone their way in recent weeks, but the Scotland Under-21 international was not about to blame Craig Thomson for their run without a win being extended to seven games.

"I obviously felt there was a bit of contact, otherwise I would not have gone down, but you just have to take it on the chin," he said.

Hearts manager Gary Locke put the defeat down to the inconsistencies you can expect from a young side rather than the pressure of the occasion.

"There is pressure on them every week, so I wouldn't use that as an excuse," he said.

"With the team being so young, you're always going to get one or two performances like that.

"Maybe on another day, we would have taken our chances, but we certainly didn't play as well as we have done.

"I was pleased with the start, but we made one or two little errors that give St Mirren a wee bit of belief.

"After that, we huffed and puffed without being as creative as we have been."

Locke was not giving up on the possibility of Hearts overcoming the 15-point penalty with which they started the season as a result of being in administration.

"With having such a young team at the start of the season, it was going to be a big ask and, after that result, it's not going to be any different," he added.

"The boys are very down, but we can't feel sorry for ourselves. There's still a long way to go."