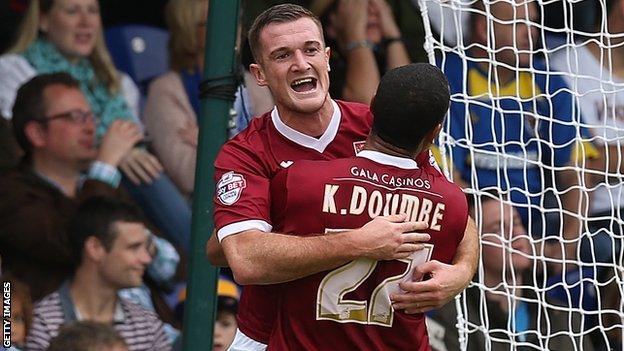 Northampton Town's Lee Collins says the win at AFC Wimbledon has given them a boost of confidence.

The Cobblers beat the Dons 2-0 to record their first away win of the season and end a run of eight league and cup matches without victory.

"But we've won a difficult game and no game is unwinnable in this league. We'll go to Oxford with confidence."

He added: "No disrespect to Mansfield but they were sitting third [when Northampton played them] and I didn't think they were very good. They beat us 3-0 but it wasn't a pretty game.

They're professionals and they're paid to do a job. We haven't, as a group, been as good as we know we can be - as our chairman quite rightly pointed out. We accept that

"I'm buzzing to score and to get an away win."

Collins' volley for the opener was his first for Northampton, and the team's first goal in over 600 minutes of football away from Sixfields.

Chairman David Cardoza last week called on the players to improve their performances, saying that the squad had "well-paid professionals with a lot of experience".

"It's not stung any of the lads," Collins said. "It's the chairman's money, it's a business world and we weren't doing the business.

"He's entitled to get stuff off his chest. Hopefully today we've shown we can do it and that he's invested in a good squad."

Those views were echoed by his manager Aidy Boothroyd, whose side remain in the bottom two of League Two despite the three points.

"They're professionals and they're paid to do a job," Boothroyd said. "We haven't, as a group, been as good as we know we can be - as our chairman quite rightly pointed out. We accept that.

"We want to make sure we get some more results."