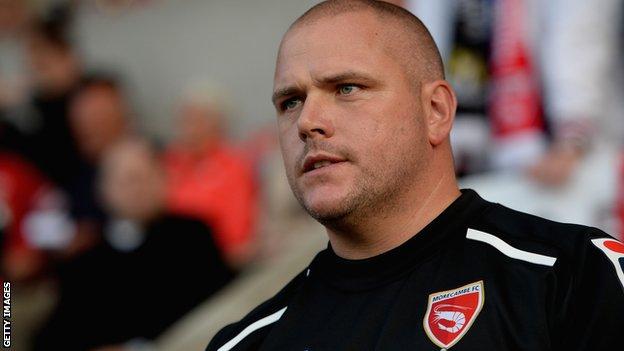 Morecambe manager Jim Bentley praised the desire of his players after they came from three goals down at half-time to beat Chesterfield.

The Spireites were 3-0 up after 23 minutes, but Kevin Ellison, Mark Hughes and Jack Sampson levelled it up.

Striker Padraig Amond then headed in the winner four minutes from time.

What a great advert for League Two football. If ever there was a game of two halves, this was it. League leaders Chesterfield ran the show in the first half as Morecambe struggled. But credit to the Shrimps as they sprinted out of the blocks at the restart and Kevin Ellison's strike gave them the impetus they needed.

"I said to the lads to not feel sorry for yourselves, you've got to show some character, don't lie down and die; all the things you say," said Bentley.

"We just went from strength to strength in the second-half and when you pop up with a great header from Podge [Padraig Amond], it's just brilliant to be involved with days like this," he told BBC Radio Lancashire.

"What a fantastic win for us, for the football club, the supporters and the people of the town.

"Momentum is massive in football and if we didn't get that first goal in the first minute, the longer it would have gone on and the more confident they would have got."

The result saw the Shrimps continue an impressive start to the season which has lifted them to sixth in League Two, despite working with one of the smallest wage budgets.

Bentley's side are now unbeaten in seven games and he believes the character of the team has shone through in that run.

"We've got an unbelievable spirit and desire and that never say die attitude and while you've got that you can go a long way," he said.