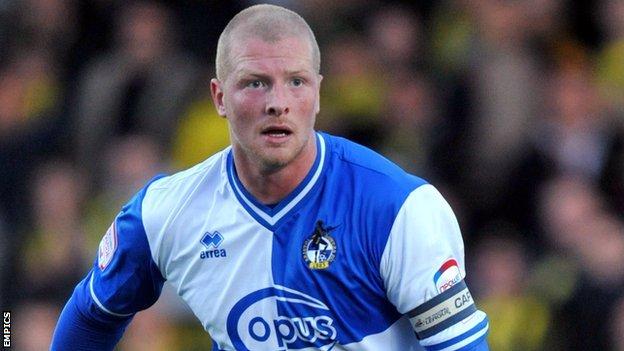 Bristol Rovers manager John Ward will consider playing Garry Kenneth despite the fact the defender has asked to leave the club.

Kenneth missed the second half of last season with a knee injury and has failed to reclaim a place in the team.

Ward revealed after Saturday's 3-1 defeat by Fleetwood that the 26-year-old wanted a transfer.

But after an injury to fellow defender Mark McChrystal, Ward said: " If I ask him to play then he has to play."

The Pirates boss told BBC Radio Bristol: "He's fit and ready to go now and with the problem with McChrystal, I may have to use him.

I'm not sure of the real reason why he wants to leave, he's not made that open.

"Garry would have to be professional about it and represent the club and himself as well as he can."

Kenneth was brought to the Memorial Stadium from Dundee United in the summer of 2012 by Ward's predecessor Mark McGhee.

The centre-back made 19 appearances before a cruciate ligament injury ruled him out for nine months.

He has now returned to full fitness and may receive a recall for Saturday's League Two games against Mansfield, with McChrystal set to undergo scans on a tendon issue.

"He's in training and if we need him on Saturday then I will use him. But the situation needs to be open and for everyone to deal with it," added Ward.

"I'm not sure of the real reason why he wants to leave, he's not made that open. His agent and the chairman have been in conversation but it's not been resolved yet.

"He's got two choices: He either wants to leave or wants to stay. He's made his decision and he's got to make the next one."