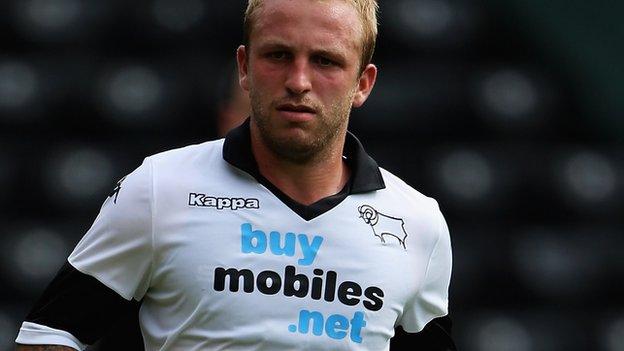 Derby County striker Johnny Russell says Steve McClaren has quickly been embraced as their new boss after the shock of Nigel Clough's departure.

The 23-year-old netted against Leeds on Saturday to help the ex-England manager get off to a winning start.

Russell, who joined Derby from Dundee United in the summer, admits he found the change hard to accept initially.

Obviously it is going to take time for them to get their views across, but I think we have started the right way

"It was disappointing to start with, but the new gaffer has has been brilliant with the boys," Russell said.

"Nigel was the gaffer that brought me here and gave me the chance to play in the Championship - I owe him for that. But that is football sometimes I guess."

"It is credit to how positive they have been since they came in," Russell told BBC Radio Derby. "They came in and told us what they want from us early doors.

"Obviously it is going to take time for them to get their views across, but I think we have started the right way."

Midfielder John Eustace, who helped inspire the Rams to a dramatic 4-4 draw with Ipswich Town as McClaren watched from the stands before he officially took the helm, said the international break has come at a perfect time for the side.

"It has been a whirlwind few days," the 33-year-old said.

"The gaffer has kept it as simple as he can over the last couple of days and we will wait and see what he has us doing over the next few weeks.

"We are all looking forward to working with a top manager again."