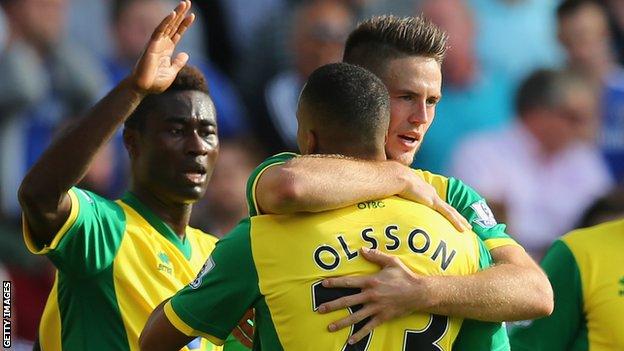 The 24-year-old forward's only strike in seven games came on his debut, but he assisted Anthony Pilkington's effort in

Hughton told BBC Radio Norfolk: "I think nobody can fault his work-rate.

"Would he be disappointed he hasn't got the goals he would have liked? Yes, he's a striker that's used to scoring goals and sometimes it takes time."

Van Wolfswinkel arrived in a reported £8.5m move this summer from Sporting Lisbon, where he scored 28 times in 58 Portuguese Primeira Liga appearances.

The Netherlands international's opening-day goal for the Canaries in a 2-2 draw against Everton remains his sole goal, but his role in a promising performance for Norwich on Sunday, including teeing up Pilkington, encouraged Hughton.

"First and foremost you want to make sure he is doing a good job for the team, which he is," said the Norwich boss.

"And I'm quite sure that if he continues in that vein the goals will come."

While Van Wolfswinkel searches for goals, the frontman tops the Premier League's fouling charts, having committed 22 infringements this season.

"It shows he is committed and is prepared to close down defenders and put them under pressure. That's always a good sign," said Hughton, whose side dropped into the Premier League relegation zone at the weekend.

"The next stage for him now is getting into the right areas for us to provide the opportunities for him to get the goals he very much wants."