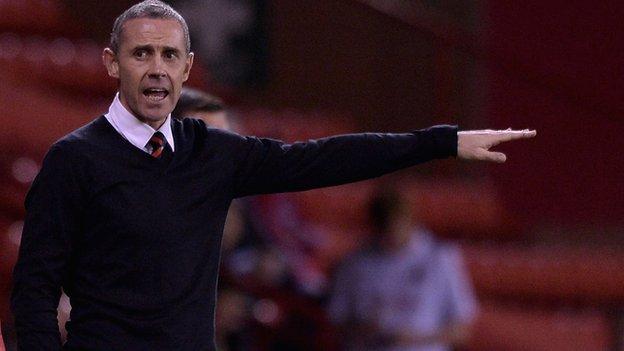 Sheffield United boss David Weir has acknowledged that the side must start winning soon if he is to keep his job.

The Blades have not registered a league win since the opening game of the season and sit in 22nd in League One.

They ended a run of six straight league defeats with a 1-1 draw against Crawley on Friday.

"Patience isn't relevant in football. We're all sensible and we know that we can't afford to keep losing games," he told BBC Radio Sheffield.

"Hopefully this result will buy me some time, I'm taking a lot of positives from it."

Marlon King's second-half strike gave the Blades a first point since the 1-1 draw with Colchester on 17 August.

The 43-year-old former Scotland international, who was appointed as Danny Wilson's successor in June, was pleased with the spirit his side showed.

"We want to win games and we didn't do that so we're not happy but this is a positive step for us. The application was spot on."

Weir's side host League Two Hartlepool in the Johnstone's Paint Trophy on Tuesday before a trip to Coventry on Sunday.