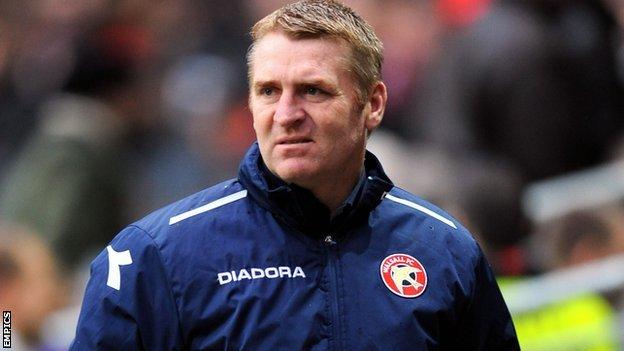 Walsall boss Dean Smith has signed an extended deal, tying him to the League One club until the summer of 2016.

The 42-year-old, who began his playing career at the club, has been in charge of the Saddlers since January 2011.

"From the start, this was always going to be a long-term project," said Smith.

"We're still in the early stages of that, but things are certainly progressing well.

"I want to continue building for the future of this club and, whilst I am offering the players longer term deals, it gives it more credence if I have the same.

"This club is known for trying to do things the correct way and we are investing in the infrastructure of the club to make it a more forward-thinking place with solid foundations."

League One play-off hopefuls Walsall, who still stand ninth in the table despite having picked up just two points from their last three games, now have to sort out the long-term future of Smith's deputy Richard O'Kelly,

"It allows me to sit down with Richard O'Kelly, who has been a big part of what we are trying to achieve here, and put plans in place to secure his future with the club.," added Smith.