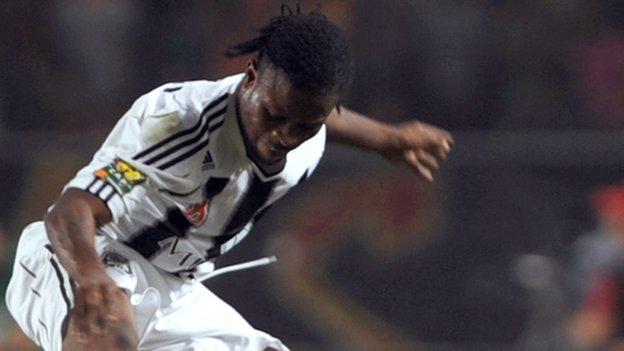 Four-time African champions TP Mazembe look set to reach the Confederation Cup final after a 2-1 triumph in Mali over Stade Malien on Sunday.

The other semi-final first leg between Tunisian rivals CA Bizertin and CS Sfaxien ended in a goalless draw.

The return legs are set for the weekend of 19-20 October.

The overall winners of the ties meet in a two-leg final planned for November and December,

Zambia's Rainford Kalaba and DR Congo's Tresor Mputu gave Mazembe a two-goal lead midway through the first half of their tie.

Morimakan Koita pulled one goal back before half-time, leaving the home side with just a glimmer of hope when they travel to central Africa for the 19 October return fixture.

Stade must score at least twice to survive - a tall order at a ground where Mazembe have scored 12 goals to win all four Confederation Cup matches this season.

The Congolese side are coached by Frenchman Patrice Carteron, who took Mali to third place at the 2013 Africa Cup of Nations before moving south to Lubumbashi.

Mazembe are the only club outside of Europe and South America to reach the Club World Cup final, shocking Brazilians Internacional in 2010 before losing to Inter Milan.

While Mputu is the playmaker, captain and talisman, Carteron can also call on stars from Ghana, Mali, Tanzania and Zambia.

In the other first leg, in Bizerte, the most northern African city, CA Bizertin and CS Sfaxien were unable to make a breakthrough.

Goalkeepers Farouk Ben Mustapha of Bizerte and Rami Jeridi made a string of superb saves during a match that had spells of dominance by both teams.

The return leg will be played on 20 October.