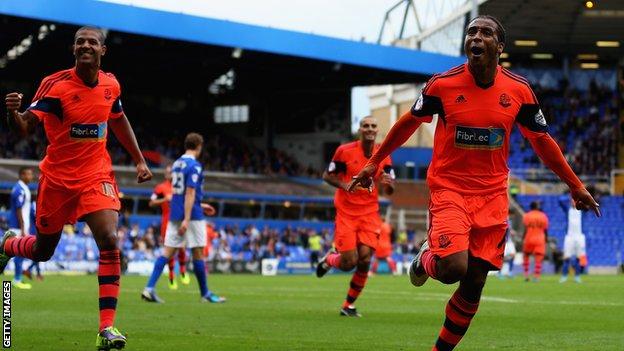 Bolton manager Dougie Freedman says he was not relieved after their first Championship win of the season as he knew that it was inevitable.

Wanderers finally secured their first three points of the season at the 11th attempt with a 2-1 win at Birmingham.

"It's not a relief, I don't work my life as a relief," Freedman said.

"If we work very hard and stay focused and we do things right, then you'll always get the rewards, that's my philosophy in life."

Jermaine Beckford's first league goal of the season and Neil Danns's close range header put Freedman's side 2-0 ahead, but they had to hold on after Nikola Zigic pulled one back and even survived a late penalty appeal.

The result saw Bolton move out of the relegation places for the first time since the middle of August.

"I thought we deserved the game today," Freedman told BBC Radio Manchester. "We showed tremendous character in the first half to silence the crowd through our football.

"Frustrated? No. Sometimes I've been wondering when it's going to turn as it's been a bit of a rough period.

Bolton's victory meant they avoided matching their start to the 1902-03 season, when they failed to win any of their first 11 league games

"It's been slippy but we've never really fallen over and I don't think you can ever accuse this team of giving up or throwing in the towel."

With his side undefeated in three games, the former Crystal Palace manager admitted he was disappointed the international break has arrived at a time when they appeared to be finding some form.

"It comes at a moment when you're just starting to get some momentum, but these are the challenges that are happening to us," Freedman added.

"Of course I'd like to play Tuesday night, but it gives an opportunity for me to work with one or two of the loan players who've just landed on my lap.

"It gives us a couple of weeks where we can regroup and look to get them back to top fitness."