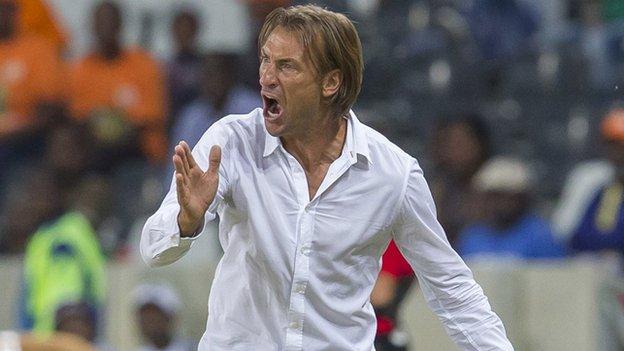 Zambia have released coach Herve Renard to allow him to take charge of French side FC Sochaux.

But Zambia struggled in defence of their title this year and were also eliminated from 2014 World Cup qualifying at the group stage.

Beaumelle, who has been working as assistant coach, will begin his time in charge with a friendly match against Brazil in Beijing next on 15 October.

The Football Association of Zambia (FAZ) said in a statement: "Herve Renard has been released from the job of national coach of the Zambian national football team.

"He has been offered a wonderful opportunity at FC Sochaux in the top league in France... FAZ and Herve have consulted and it has been agreed not to stand in his way.

"It is a compliment for a coach working in Africa to be head-hunted by a top European club. It makes us proud to be able to take ownership of Herve's rise as a successful international coach.

"FAZ wishes to thank Renard for his dedication to duty, hard work, proficiency and wish him well as he takes up his new coaching job."

Renard, 45, first took charge of Zambia in 2008 and he steered them to the quarter-finals of the 2010 Nations Cup - the first time they had reached that stage for 14 years.

Then followed spells with Angola and USM Alger before he returned to Zambia and achieved the greatest feat of his career by leading Zambia to their first African title in 2012.

Sochaux confirmed on their website that Renard "will become the new coach", taking over from former Senegal international defender Omar Daf, who has been interim coach of the club since the departure of Eric Hely at the end of September.

And he will be reunited with Zambia striker Emmanuel Mayuka, who is on loan at Sochaux from English Premier League side Southampton.