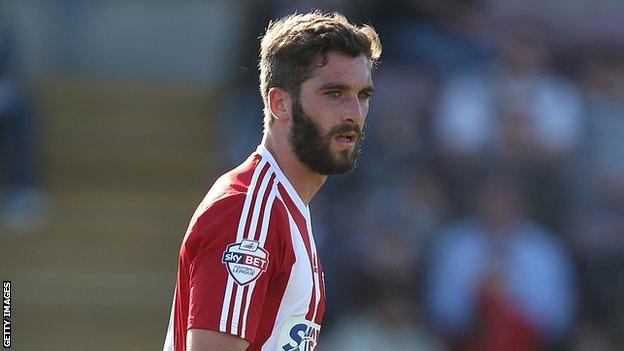 Brentford striker Will Grigg expects that their frontline will click sooner rather than later.

The Bees have failed to score in three of their last five games in League One and lost on each occasion.

The 22-year-old told BBC London 94.9: "It is just that little bit of quality in the end or that little finish. It is just not happening at the minute.

Of teams in the top half of the League One table, only ninth-placed Walsall (11) have scored fewer goals than Brentford (12) in 10th

"It's a bit frustrating at the moment but we need to get through this and make sure we do the business."

He added: "We are lacking that little spark in the final third at the moment but we have been working hard and we have got some good quality in there with Clayton Donaldson, myself, Farid El Alagui and Sam Saunders.

"Even though we have had a little bit of a stuttering start I think we have got a great chance of making the Championship."

Grigg joined Brentford this summer from Walsall but, after two goals in his opening eight appearances for the west London club, he admits his start at the club has been "frustrating".

Bees manager Uwe Rosler says his side "have not played to Grigg's strengths" and the Northern Ireland international believes he is still settling into their style of play.

"Personally, I haven't missed too many chances - we haven't really created an awful lot," Grigg said. "The few games where we have been missing chances it has been from set-plays.

When you play with certain players it takes time to learn their movements. At Walsall I was the main man and my movements was what started off the moves. It takes time to gel

"When you play with certain players it takes time to learn their movements.

"At Walsall I was the main man and my movements was what started off the moves. I am more of a striker that goes in behind on the shoulders of players.

"We showed against Rotherham it is starting to work. We got into good positions and the lads played some good balls into me."

Grigg's time at Griffin Park has already been interrupted twice by call-ups for international duty and he is set to miss Saturday's trip to Stevenage as he has been named in the squad for his country's final two World Cup qualifiers, against Azerbaijan and Israel.

"It's difficult and I think that is the problem with the rule with League One and League Two not getting an international break," he said.

"I miss a game and it gives someone an opportunity. I am lucky enough to be called into the squad so I'll go away and do my best and then come back and do my best again."