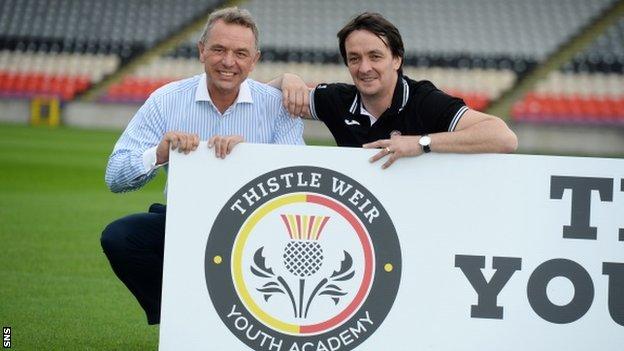 Euromillions winners Colin and Chris Weir have given £750,000 to allow Premiership club Partick Thistle to create a new youth academy.

The Thistle Weir Youth Academy will be run by the Glasgow club's former striker and manager, Gerry Britton, who was already head of youth development.

The Weirs, from Largs in Ayrshire, won £161m two years ago.

Colin Weir explained that they wished to help as they were "longstanding fans of Partick Thistle".

"What impressed us was that it wouldn't just be for elite players but would also encourage local youngsters into football for the sheer enjoyment and fun of it," he said.

"Having seen the club's determination to get this project off the ground, we decided that, as we were in a position to offer financial assistance, we wanted to help them achieve their dream."

The Weirs have previously donated large sums to a number of causes, including to help health, sport, cultural, recreational and animal welfare projects and the

The academy will be based out of the club's Firhill Stadium in Glasgow's Maryhill with the aim to "create a professional pathway to football for 120 elite players, while offering the chance to play football to up to 1000 boys and girls for enjoyment and fitness".

The new package will extend that to offer professional coaching, physiotherapy support, nutritional advice and all the benefits of current sports science knowledge currently enjoyed by first-team players.

Initially, 400-500 boys and girls, from the age of five, will join the academy to play football for fitness and fun, with the best moving into the elite teams.

Britton, who has been combining his role with his career as a solicitor, said: "This is a chance for the Thistle Weir Youth Academy to give hundreds of kids the opportunity to get involved in football, for fun or by creating a path to professional football for others.

"There is huge potential pool of talent out there and it's going to be our job at the Thistle Weir Youth Academy to find youngsters and give them everything they need to become the professional footballers of the future."