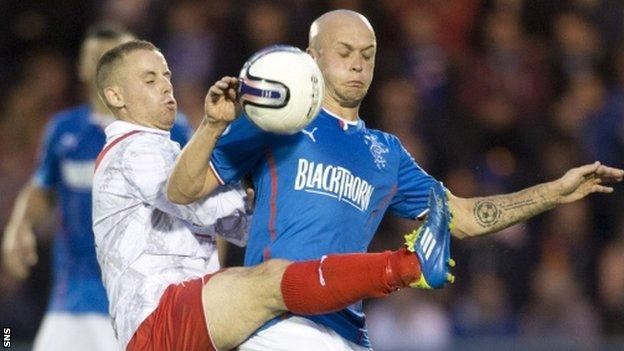 Rangers have been drawn at home to League One rivals Airdrieonians in the third round of the Scottish Cup.

Four of the six Championship clubs involved at this stage were drawn together, with Queen of the South hosting Hamilton Academical.

The three junior clubs in the third-round draw were all paired with senior opponents.

East Superleague champions Linlithgow Rose must first overcome Highland League outfit Deveronvale in a replay if they are to set up a tie in Coatbridge against League Two side Albion Rovers.

Two Lowland Football League teams who have been given away ties.

Preston Athletic will face League One outfit Ayr United should they win their replay with Queen's Park, who are struggling at the foot of League Two.

Should Whitehill Welfare, who also joined the new feeder division set up by the Scottish Football Association this summer, win their replay against League Two's Stirling Albion, they will take on Highland League side Turiff United.

Clyde host the winners of the all-Highland League replay between leaders Brora Rangers and Cove Rangers.

Ties scheduled for the weekend of 2/3 November.