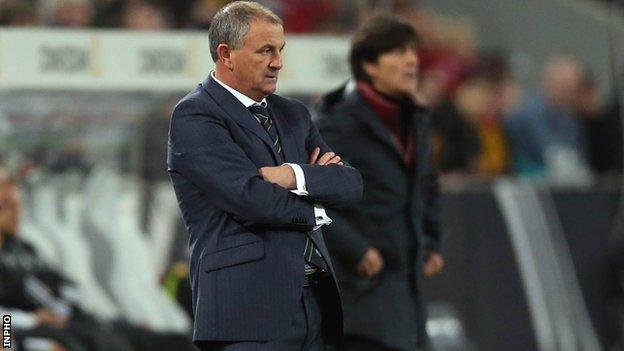 Republic of Ireland interim manager Noel King was delighted with his team's display despite losing 3-0 to Germany in the World Cup qualifier in Cologne.

It was King's first game in charge after Giovanni Trapattoni's departure.

"Against a top team in the world, we created chances and I'm delighted with our boys - I'm just sorry we didn't score, we deserved a goal," said King.

Anthony Pilkington is set to miss the final qualifier with Kazakhstan on Tuesday because of a hamstring injury.

Germany booked their place in next year's World Cup finals in Brazil thanks to goals from Sami Khedira, Andre Schurrle and Mesut Ozil as the Republic began life without Trapattoni, who left his position following September's defeat by Austria.

King added: "We got to the 89th minute and it was 2-0. We had chances to go 2-1 and despite not having the lion's share of possession, to come away from the best team in the world in this environment and create five or six chances, that was a testament to their passion and courage."

The Republic did have chances and may have got themselves back into the game had lone striker Anthony Stokes, whose loose pass led to the opening Germany goal, not mishit when attempting to convert the rebound from Ciaran Clark's header as it came back off the woodwork.

The Celtic forward then had three more promising opportunities after the break.

"He gave the ball away for the goal, but he worked his socks off. He was very creative and on another day, he could have got a hat-trick," added King.

"But that's the life of a striker. If they score, they are a hero and if they don't, they are mugs."

Stokes admitted he had passed up several chances to get his name on he scoresheet, but insisted he would not dwell on his misses.

Asked about his chance from Clark's effort, he said: "I probably got ahead of the ball. I didn't think it was going to come that far off the bar, but I expected to do a little bit better.

"It was one of those nights. I'll be annoyed for half an hour, and then I'll let it go."