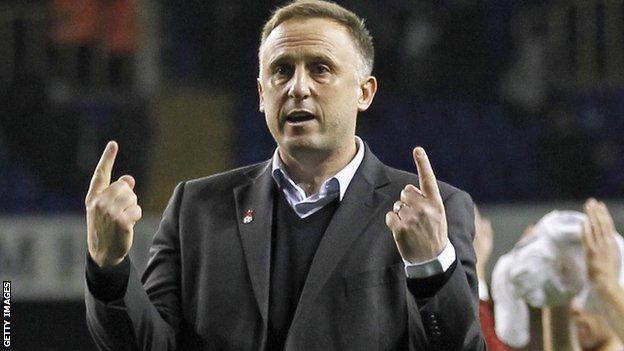 Cheltenham boss Mark Yates has urged fans to get behind the team after their fifth League Two defeat of the season.

The Robins, last season's play-off semi-finalists, have taken nine points from a possible 30 so far this term.

"They're good supporters, they're not abusive or stuff like that. If we stick together we'll be fine," 43-year-old Yates told BBC Gloucestershire.

Cheltenham were mooted as play-off candidates for the third year running at the start of this season.

But the 2012 finalists have won only two games, against Accrington and AFC Wimbledon, both of which finished 1-0.

And although Yates believes the effort is being put in by the players, he admitted more needs to be done to go on a winning run.

"I'm talking about us being braver. Braver with the ball and being brave when it matters. I thought for 60 minutes of the game we were the better team but we lost.

He added: "I think the supporters saw the effort and all the commitment. Everyone's just got to keep working and raising their game."

Cheltenham travel to Dagenham next Saturday, who are unbeaten in five games, and will be without loan defender James Wilson after he was called up to the Wales squad for their final World Cup qualifiers.

Wilson has spent the last month at Whaddon Road and is set to go back to parent club Bristol City on his return from international duty.