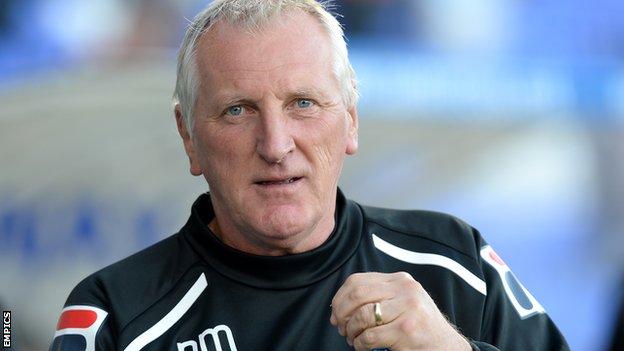 Tranmere boss Ronnie Moore says his players are ready for the challenge of reversing the club's fortunes.

Rovers are bottom of League One on goal difference following Saturday's 1-0 defeat at Swindon.

"The players are up for it, there's no doubt about that," he said.

"I'm not happy. Getting a side ready and then coming out and getting beat is not a nice feeling. I'm not used to it, and not as often as it's happening at this present moment."

The start to this season has been in complete contrast to last year when Moore's side were four points clear at the top of League One at this stage.

Tranmere struggled in the final third of that campaign, losing 12 of their final 17 games and have only won once in the league in 2013-14, a 1-0 success at Oldham on 31 August.

"That's football and how football can change," Moore told BBC Radio Merseyside."You get two manager of the months in the first few months last season and everybody's telling me you're rubbish this season.

"I don't read papers and I don't listen to what's being said. Obviously you're not going to please everybody at this stage and there will be a vast majority who aren't too happy.

"But that's the way it goes, you've just got to dig deep and keep going.

"I've thought they've given everything and I can't ask more from any of them in terms of effort, commitment and desire but I can ask a little bit more in the attacking third from the decision-making."