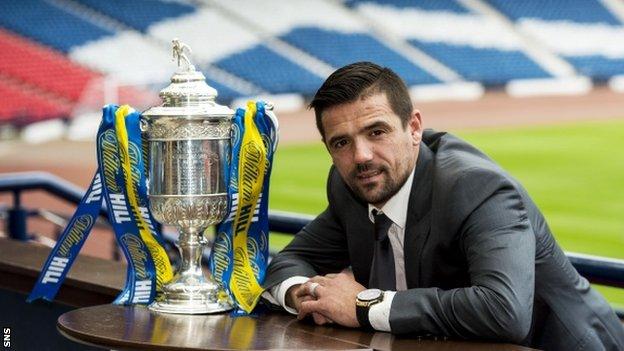 Former Rangers, Dundee and Raith Rovers forward Nacho Novo hopes his inability to find a new club in Scotland will not force him to give up the game he loves.

The 34-year-old had after ending a second spell with Huesca in his Spanish homeland.

"I hope something can happen so I can still play football," said Novo, who said he has had offers from abroad.

"Because I feel fit and I enjoy playing football and miss it a lot."

Novo first arrived in Scotland in 2001, when he joined Rovers after ending his first spell with Huesca.

Success in Kirkcaldy led to a two-year spell in Dundee then six at Ibrox, where he was part of championship, Scottish Cup and League Cup-winning sides.

He also fell in love with the country and his preference would be to remain in Scotland.

I think the Rangers players will just concentrate on football. They are there to do a job and win games

"I would like to stay here as my family is from here and I have my boys at school here," he told BBC Scotland.

"At this time, I am just training myself. It is always hard to train on your own, but I am trying to keep as fit as I can.

"I am willing to speak to clubs and hopefully things can come good for me."

Novo, who also played for Sporting Gijon and Legia Warsaw after leaving Rangers, was speaking after helping conduct the

"Coisty is the new manager and it's his decision," he said. "I just have to walk away and see what happens."

Novo did not think the continuing off-field problems would trouble Rangers' players.

"I think the players will just concentrate on football," he said. "They are there to do a job and win games.

"Joining a big club, you are going to get a lot of pressure and everybody is going to demand winning games and playing well.

"Winning games is the most important thing. It is a big squad that has been improved since last year.

"They are favourites and I hope they keep doing well."