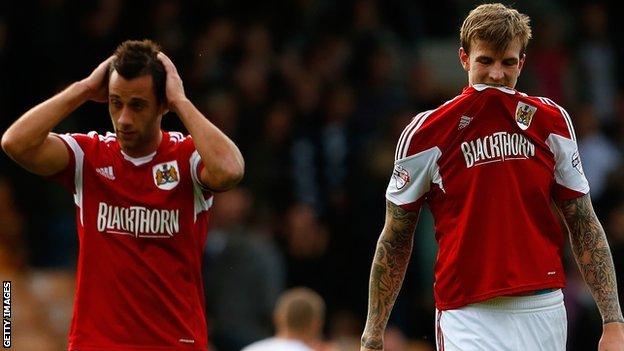 Jay Emmanuel-Thomas says the Bristol City players rallied around defender Aden Flint after his error in their 1-1 draw with Port Vale.

A mistimed back-pass by Flint in the 90th minute of Saturday's game gifted Vale the equaliser and denied City a first League One of the season.

"The boys had to put their arm around him and let him know it wasn't all on him," said Emmanuel-Thomas.

"He was in bits. We said forget about it and move on."

The forward, 22, told BBC Points West: "He walked around the dressing room and apologised to everyone but I said to him don't worry, it's one of those things.

"He had a great game apart from that. It was the only step he put wrong."

Scott Wagstaff had put City ahead in the 55th minute and they looked set for a first league win since 9 March, until Flint tried to feed the ball back to keeper Elliott Parish and it was intercepted by Lee Hughes who slotted home.

"It was looking bright until that moment," added Emmanuel-Thomas, City's top scorer this season with seven goals.

"We didn't lose the game but we were disheartened that we didn't win.

"We're dominating most games in possession and creating a lot of chances so hopefully over the course of the next few games we can start hitting the back of the net."

He's 24 years of age and he's going to spend most of his career in football being frustrated, because that's what it is. He's got to learn to live with it and bounce back. If one thing breaks his spirit then he's in the wrong industry.

Bristol City's only victories this season have come in cup games - against Gillingham and Crystal Palace in the League Cup, and Bristol Rovers in the Johnstone's Paint Trophy.

The Robins' 2-1 win over their local rivals, which drew a crowd of over 17,000, earned them a second round draw with Wycombe on Tuesday.

And the derby win gave Emmanuel-Thomas a memorable competition debut.

"From the first round it was a great experience," he added.

"It's obviously not going to be as big [against Wycombe] but it's a competition we're looking to do our best in."