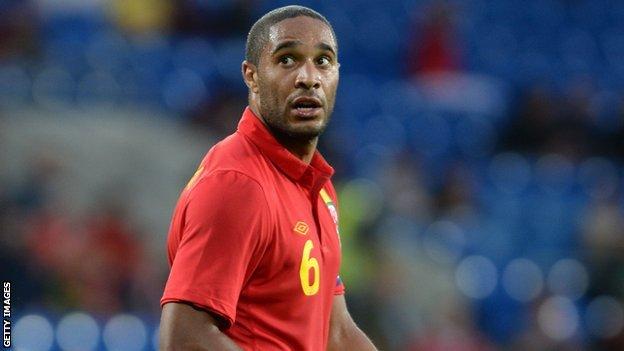 Wales have suffered another blow ahead of World Cup qualifiers against Macedonia and Belgium with skipper Ashley Williams of Swansea ruled out.

Uncapped Southampton midfielder Lloyd Isgrove, 20, is one of nine call-ups.

However, Williams's absence is a further defensive worry for Coleman, who has again left West Ham United centre-back James Collins out.

After the 3-0 defeat by Serbia in Cardiff on 10 September, Coleman was critical of Collins, saying the player had rejected the chance to join the squad before the game, a claim Collins denies.

Cardiff forward Craig Bellamy, 34, has been included for what will be his after announcing his international retirement at the end of this campaign.

Bale was an early withdrawal, having made three appearances since his world record move to Real Madrid.

Davies suffered a suspected hamstring injury late in Swansea's 2-0 defeat at Southampton on Sunday, while playing for Celtic and Gabbidon (hamstring) missed Crystal Palace's trip to Liverpool at the weekend.

Gabbidon's team-mate Jonathan Williams is another injury absentee, adding to the problems in midfield with Allen, Ledley and Crofts all missing.

Newcastle United defender Paul Dummett could have been considered for his first senior cap, but the Wales Under-21 player has injured a hamstring.

Wales go into Friday's clash against Macedonia at Cardiff City Stadium bottom of Group A and travel to leaders Belgium on Tuesday, 15 October.

Coleman's side have six points from eight games, leading to speculation over his future as Wales boss.

He is still in negotiations to extend his deal beyond the qualifying campaign.

Football Association of Wales chief executive Jonathan Ford had hinted much could depend on the next two results in the next two World Cup qualifiers.

But Ford has since told BBC Radio Wales that on their two remaining group clashes.