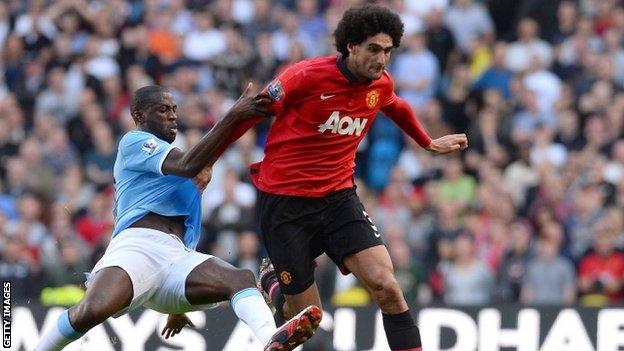 Manchester United midfielder Marouane Fellaini is expected to play with a cast on his wrist for Belgium in their World Cup qualifiers against Croatia and Wales.

The 25-year-old midfielder missed United's 2-1 win at Sunderland on Saturday because of the injury.

It had been feared he would be out of action until December.

But although coach Marc Wilmots said Fellaini had ligament damage and needed surgery, he trained on Tuesday.

There are also reports suggesting Fellaini, who joined United from Everton on transfer deadline day for £27.5m, will delay having an operation until December.

On Tuesday, an article on United's official website said: "Marouane Fellaini has trained with Belgium wearing a protective cast on his injured wrist.

"Although some reports suggest the midfielder faces an operation and a spell on the sidelines, the deadline-day arrival is due to play in a splint against Croatia and Wales in the World Cup qualifiers."

Group A leaders Belgium face Croatia away on Friday and Wales next Tuesday.

Fellaini has made five appearances for United, featuring in victories over Crystal Palace in the Premier League and Bayer Leverkusen in the Champions League.

The Belgian had previously spent two lengthy periods on the sidelines while at Everton.

In February 2010, he suffered an ankle ligament injury that kept him out of the rest of the season and another ankle injury around the same time the following season that forced him to miss the remainder of that campaign.