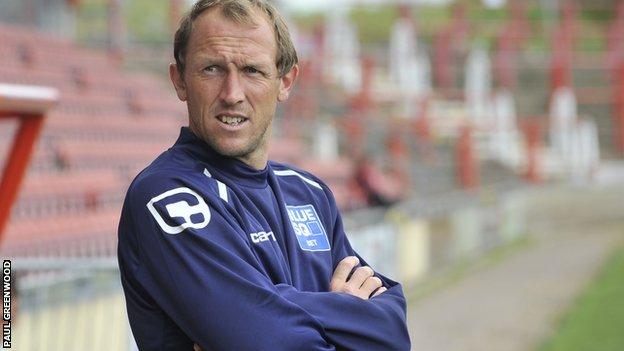 Player-manager Andy Morrell says he is finding Wrexham's current poor run of results in the Conference Premier tough to deal with.

He saw his side suffer a 2-1 defeat away to Salisbury on Saturday, making it four games without a win.

Wrexham face Southport at the Racecourse Ground on Tuesday, with Morrell needing a victory to ease the pressure on his side.

"It is hard and it's tough," said Morrell.

Hopefully, the players will stand up and be counted and do everything they can to win a football match

"There are a lot of decisions to be made and I think about things all the time. You cannot get away from it."

Morrell has already had to hear fans booing his side during the 3-2 home defeat against Braintree in September.

Last season's beaten Play-Off finalists are struggling to find any kind of form during this campaign.

Wrexham missed out on promotion back to the Football League when they lost the Play-Off final to Newport last season.

But Morrell and his side now find themselves at the wrong end of the Conference table in 20th place and the Dragons current record reads won three, lost seven and drawn three so far this campaign.

Morrell says he is trying to set the right example for his players and is positive Wrexham can end their run of poor form.

"I have to be positive and have a plan to beat Southport," said Morrell.

"They (players) are looking to me for an olive branch and be a guide to follow.

"I am trying to do that and let them see my enthusiasm. Hopefully, that will rub off on them.

"Hopefully, they will stand up and be counted and do everything they can to win a football match.

"We just lack a bit of confidence. This league is good because games come thick and fast and you have a chance to put things right straight away."