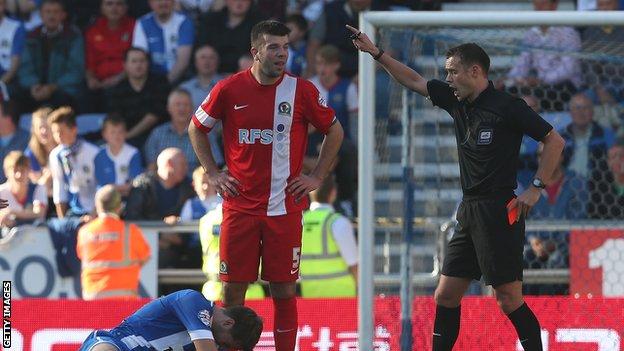 Defender Grant Hanley has apologised for his red card in

The Scotland international, who was captaining Rovers in the absence of Scott Dann, was dismissed in the first half after clashing with Nick Powell.

Bowyer confirmed Hanley, 21, has been fined by the Championship club.

"Credit to the boy because he rang me and wanted to speak to me. He came in face to face and was very apologetic," Bowyer told BBC Radio Lancashire.

Rovers were leading 1-0 at the time of Hanley's red card, and he will now miss Blackburn's next three matches.

"I got to see the sending off myself and we're not appealing it, that's for sure," continued Bowyer.

"I don't think he's actually meant to do what he's done. He just try to shrug him off - he said that himself - but he's accepted that you can't raise your hands.

"He was gutted because he now misses three games and he might not get back into the team with Matt Kilgallon and Scott Dann forming a partnership."

Hanley has been an ever-present in the league for Blackburn this season, and while Bowyer has conceded that the centre-back is not certain to regain his place once he completes his ban, the Rovers boss is confident the youngster will recover from the incident.

"It's upset him that he's let so many travelling fans down," said the 42-year-old. "He's got a special relationship with the supporters and he's apologised to them as well.

"Credit to him for coming and knocking on the door. I think that shows you the type of lad he is and why the fans appreciate him, because he's so honest.

"We didn't have any qualms about naming him captain [at Wigan] and I won't in the future because eventually he's going to captain his country as well - I strongly believe that.

"He's been honest and accepted it. He's been disciplined internally and we move on now."