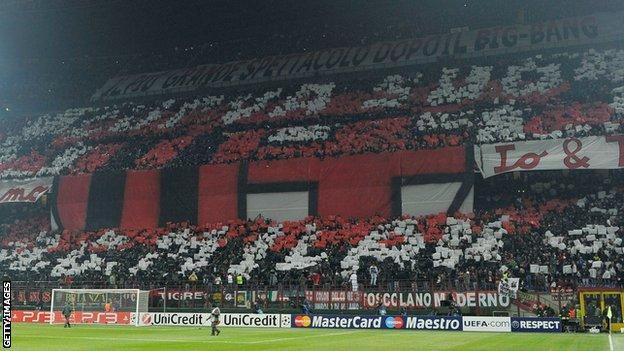 AC Milan will be able to play Udinese in front of their own fans after a ruling that they must play one match behind closed doors was overturned.

Serie A bosses had issued the punishment after fans were found guilty of "insulting" chanting towards Juventus fans in a 3-2 away defeat.

But the San Siro will be open to fans when Udinese visit on 19 October.

The statement added: "The Federal Court of Justice has suspended the sanctions on an appeal filed by Milan against the closure of the Stadio Giuseppe Meazza (San Siro) for one match and a fine of 50,000 euros.

"The Federal Court of Justice asks the Federal Prosecutors Office to gather every possible piece of evidence."

Serie A has clamped down on racist and discriminatory chants this season, with three other clubs - Roma, Lazio and Inter Milan - receiving partial stadium bans after their fans abused black players.

The 31-year-old France international received three games for punching Juventus defender Giorgio Chiellini and an additional one match for being sent off later in Sunday's defeat.