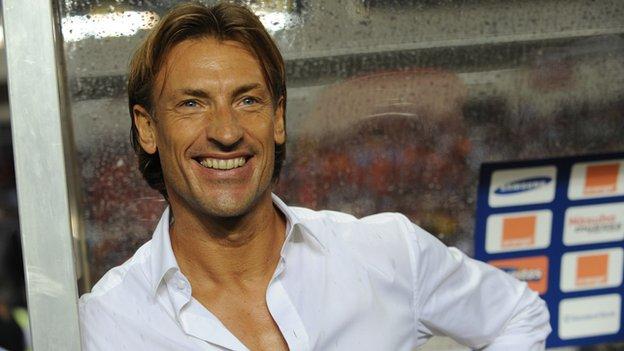 Football Association of Zambia president Kalusha Bwalya has paid tribute to Herve Renard following the end of the Frenchman's reign as coach.

The 45-year-old Renard, who led Chipolopolo to their only Africa Cup of Nations title in 2012, leaves the job by mutual consent to take over as coach of French side FC Sochaux.

"He is an honest man who is hard-working and always he did his very best for Zambia.

"He was young and enthusiastic when he came to Zambia in 2008 and he took us to the Africa Cup of Nations in Angola in 2010 where we reached the quarter-finals for the first time.

"He then went away but when he came back I think maybe he felt he had unfinished business - he completed it when he conquered all by winning the biggest trophy, the Africa Cup of Nations at the 2012 tournament in Equatorial Guinea and Gabon.

"He has left a very good platform - he should be proud of himself as a coach."

Renard was unable to repeat his Nations Cup success glory this year as Zambia were eliminated at the group stage of the finals in South Africa - and he also failed to steer the country through to next year's Wold Cup finals in Brazil.

Perhaps the time was right for a change in Zambian football and a change for Renard.

Bwalya, though, is keen to reflect on Renard's success and is certain the Frenchman has a bright future.

"There is never a perfect time to change a coach but if there was ever a moment to move on it is now," Bwalya added.

"Herve ran a good race in Zambia. He will be grateful for his experience in Zambia and I think his four or five years here will stand him in good stead.

"When he came no-one knew about him but now he is a household name. The people in Africa respect him.

"I am happy for him that he can go to Europe and establish a career for himself there.

"It is a good moment and a wonderful opportunity for him to move on."