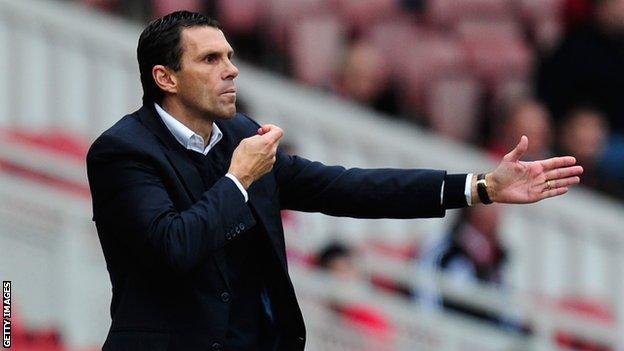 Sunderland are set to appoint former Brighton boss Gus Poyet as their new manager within the next 24 hours.

The Black Cats, who lie bottom of the Premier League table, sacked Paolo Di Canio on 22 September after only 13 games and six months in charge.

Uruguayan Poyet is understood to have held talks with Sunderland owner Ellis Short and is close to signing a three-year deal at the Stadium of Light.

Poyet, 45, was dismissed in June after four years at the Seagulls.

Sunderland's senior professional development coach Kevin Ball has been in temporary charge of the club since Di Canio was relieved of his position following a player revolt at the club.

Ball, 48, had asked to be considered for the job, but said following Sunderland's 2-1 defeat by Manchester United on Saturday he did not expect to be doing another post-match press conference any time soon.

Poyet, who has no experience of management in the top flight, made no secret of his interest in the job at the Stadium of Light, and recently said: "I planned that, over the first matches of this season, I would pay a lot of attention to the teams I thought could be in trouble.

"Of course, I watch Chelsea, Arsenal, Manchester, but there was a group of teams who, if they didn't start well, I thought I could have a chance.

"I was watching Sunderland a lot. People were talking a lot about them in the summer because of Paolo and how many new players they had, so I have seen quite a lot of them."

Poyet guided Brighton to the 2010-11 League One title 17 months after taking the job, and took them to last season's Championship play-off semi-finals, where they were beaten by eventual winners Crystal Palace.

He was suspended by Brighton in May after an internal investigation and disciplinary hearing and sacked a month later for gross misconduct.

The full reasons for his sacking have not been revealed by either party, with Brighton saying the matter would stay confidential "to ensure and maintain confidentiality and dignity" after the former Chelsea midfielder's unsuccessful appeal against his dismissal.

Poyet said in August he was taking legal action against Brighton over the decision to dismiss him.

He is set to become the sixth Sunderland manager in the past five years - with the Black Cats currently bottom of the Premier League with one point from seven games.