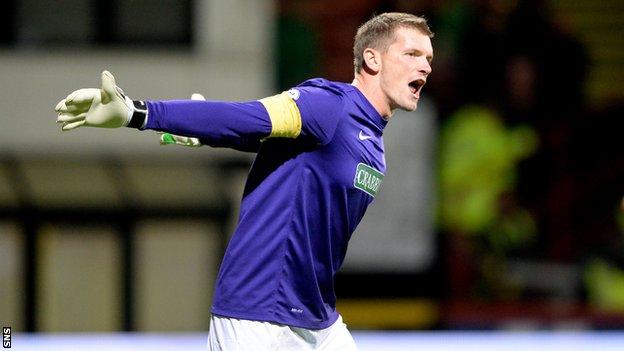 Pat Fenlon remains unfazed by Hibernian's critics after watching his side secure a narrow victory against Partick Thistle.

"If you're getting beaten and not winning games, you deserve criticism," said Fenlon.

"But I think we've been on a half-decent run and we've not had enough plaudits for it."

The win pushed the Edinburgh side up to fifth place in the Scottish Premiership, level on 14 points with fourth-placed Aberdeen.

Craig's strike was one of few chances created by Fenlon's men and the Irishman admitted they were fortunate to claim three points.

"It's a smash and grab for us," said the Hibs boss.

"In fairness to Thistle I thought they were excellent in the first half, they passed the ball really well.

"They probably had more chances in the second half, but we showed character and once we scored we settled down a bit and played football.

"Up until then we were bitty and all over the place. However, if you can win games when you're not playing well, it's a good trait to have."

It could have been different, had Kris Doolan scored when one on one with Hibs keeper Ben Williams, but the Englishman confidently saved.

"I think from our point of view we'll say it was good goalkeeping," said Fenlon.

"Partick Thistle might think they should finish them. I've seen them in a fair few games and they've created chances and maybe not taken as many as they would like.

"I thought Ben was fantastic. He took a little bit of flak after the game last week in Inverness, for one of his only mistakes since he's been here.

"I thought tonight he was first class and his reactions to the saves were brilliant."