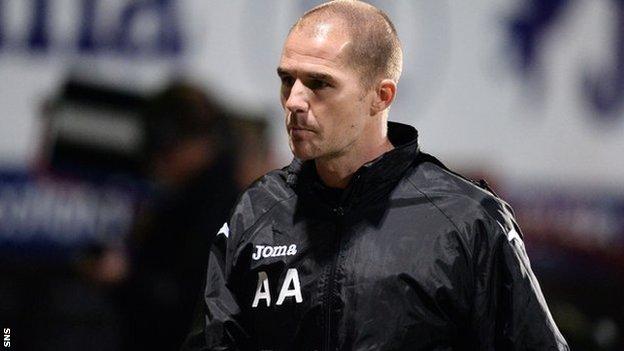 Alan Archibald insists his misfiring Partick Thistle side lacked a rub of the green in the defeat by Hibernian.

Kris Doolan spurned Thistle's best chance and they were made to pay when Liam Craig scored the only goal of the game.

"It was evident for everybody to see tonight that we dominated the game for long spells yet we took nothing from it," Archibald said.

"You've got to take your chances in this league and keep clean sheets."

Kris Doolan didn't look that confident when he ran through but last week he scored a very good goal from a tight angle,

Partick dominated for long spells but failed to turn their superiority into goals.

And Hibs made them pay for their profligacy when Craig finished brilliantly from substitute Abdellah Zoubir's cut-back.

"(Kris) didn't look that confident when he ran through but last week he scored a very good goal from a tight angle," said Archibald.

"He's been full of confidence all week in training and I fancied him to score. But he had a wee look over his shoulder as he was running through, which was surprising.

"But with his movement, workrate and everything he does for the team, he deserved a goal. We've just got to keep on doing what we're doing.

"It would've been easier for myself if we had been been terrible and I could've gone in and had a go at them. We go into the international break on 10 points and everybody's disappointed. We had the chance to move above Hibs, that's the biggest disappointment."