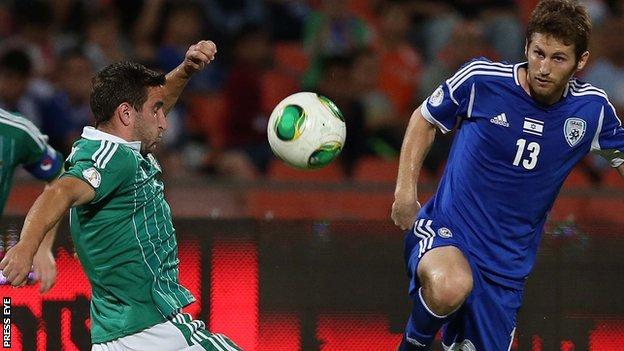 Northern Ireland restored some pride with a draw against Israel in Tel Aviv, a result which saw them finish fifth in World Cup qualifying Group F.

Eden Ben Basat gave Israel the lead on 43 minutes with a glancing header into the bottom corner from eight yards out.

Steven Davis equalised with a well-struck low right-foot shot from the edge of the box which bent away from the goalkeeper into the net.

NI manager Michael O'Neill made six changes to his starting line-up from the 2-0 defeat in Azerbaijan, three enforced, for the final game of a hugely disappointing qualifying campaign.

Meanwhile O'Neill reverted back to his favoured 4-2-3-1 formation in preference to the 3-5-2 which he employed in Baku on Friday night.

Northern Ireland's record prior to the game provided little cause for optimism - no wins in their last 13 away matches, competitive and friendly, one win in their last 21 away games and just three wins in 37 fixtures, home and away.

Coming into the game on the back of dismal away defeats by Luxembourg and Azerbaijan, the visitors produced some impressive build-up play during an uneventful first half, but were unable to pose any attacking threat in the final third of the pitch.

Paterson had an ambitious appeal for a penalty turned down after falling in the box and substitute Chris Brunt, on for the injured Evans, fired well over the bar.

At the other end, Lior Rafaelov was unfortunate when the ball bobbled in front of him in the area when he had a clear view of goal, Niall McGinn made a crucial tackle on Eyal Meshumar and Roy Carroll saved a Natcho free-kick with his feet.

Craig Cathcart slid to block a Ben Basat shot which deflected over the bar, before the home side broke the deadlock with two minutes of the half remaining.

Meshumar crossed from the right and Ben Basat was left unmarked to head home his sixth goal in seven qualifying games.

The early stages of the second period were even less inspiring than the first, but midway through the half Davis saw his slightly deflected low shot turned round the post by home captain Aouate.

The Northern Ireland skipper went one better soon after when he secured the morale-boosting equaliser, powerfully lashing in his fifth international goal.

Sammy Clingan won the ball in midfield and Jamie Ward played the ball into the path of Davis, whose well-struck shot edged out of reach of the keeper.

Soon after, Paterson almost made it 2-1 but his first-time shot was brilliantly saved by Aouate, while Chris Baird made a vital block late on.

Northern Ireland, who lost 2-0 to Israel at Windsor Park in March, finish their campaign on seven points, with one win, four draws and five losses, but at least have the consolation of ending on a positive note.