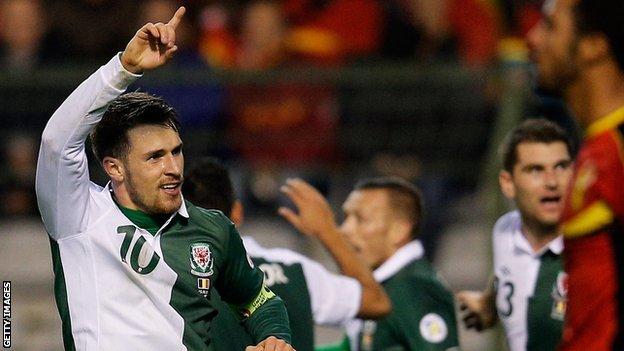 The hosts, who clinched their place in Brazil on Friday, took 64 minutes to break the deadlock with Chelsea's Kevin De Bruyne scoring from close range.

Wales goalkeeper Wayne Hennessey was outstanding while Ramsey and Craig Bellamy, in his final Wales appearance before retiring, stood out.

Unbeaten Belgium had dropped only one point in the group before the visit of under-strength and unfancied Wales.

Home manager Marc Wilmots made five starting line-up changes and left Eden Hazard and Jan Vertongen on the bench, a sign of the sort of strength in depth that Wales boss Chris Coleman could only envy.

Coleman went into the encounter with his future in the role uncertain, having lamented the fact that some of his key players were rarely, if ever, fully available to him.

Real Madrid's Gareth Bale has been the most notable absentee as Wales' campaign drew to a close as his fitness problems continued to hinder club and country.

With Joe Allen, Adam Matthews, Ashley Williams and Joe Ledley also among the injured, Coleman could have been forgiven for not looking forward with any confidence to taking on the group's dominant force.

Wales will also have to do without Cardiff striker Bellamy, who signed off with the sort of flat-out effort that has marked his 78 caps.

Coleman's overall record is now scheduled for close scrutiny by the Football Association of Wales.

But no matter what the outcome of deliberations between manager and employers, he will doubtless look back on the match in Brussels with some pride.

Wales were positive in their approach from the outset with Ramsey and Bellamy to the fore.

Goalkeeper Hennessey, on loan at Yeovil from Wolves, blocked Romelu Lukaku's effort with his knees.

Mirallas went closest in the opening period, although Everton team-mate Lukaku may have claimed it had the deflection off his shoulder ended up in the back of the net rather than rebounding off the crossbar.

At the other end, Wales also felt they had reason to be aggrieved with Simon Church appearing to be flattened by Daniel van Buyten's challenge from behind when the Welshman had only goalkeeper Thibault Courtois to beat.

Wales' determination to take the game to Belgium showed no signs of abating after the break.

James Collins, having patched up his differences with manager Coleman ahead of their 1-0 win against Macedonia on Friday, epitomised the effort.

He was clearly in pain from an early ankle twist that required treatment and had to suffer the indignity of being banished to the sidelines for sporting the wrong-coloured strapping as the second period got under way.

However, if Belgium and their fans thought it was all over, Wales did not.

Liverpool academy midfielder Harry Wilson came on to make history. At 16 years and 207 days the Wrexham-born man became the youngest player to be capped by his country; beating Bale's record by 108 days. And at 34 years of age, Bellamy's international stint ended alongside a player 18 years his junior.

The visitors continued to press forward and when Bellamy popped a pass through a static defence, Ramsey equalised in style, left footed and from the narrowest of angles to stun the home crowd.

Having sent on Hazard and Vertongen, Wilmots had no further aces to play and Belgium were unable to find a winner.