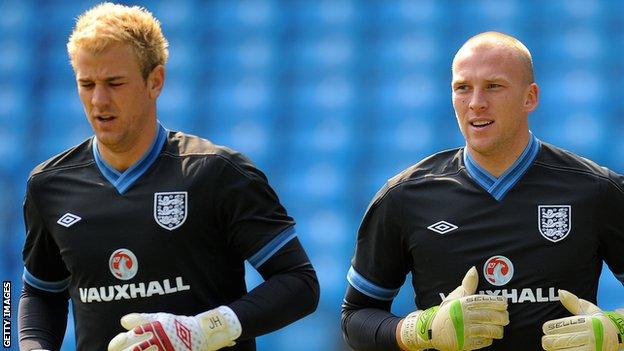 Hart, 26, was criticised for his errors in Manchester City's defeats by Cardiff,Aston Villa and Bayern Munich.

Of Joe Hart's 35 games for England, 21 have finished in victories, while 12 have been drawn, and he has been part of a losing England side only twice

"Joe's the England number one. Rightly so," said Ruddy, one of Hart's two understudies in the England squad.

"He doesn't warrant that sort of attention. He's a top-drawer keeper."

The focus on Hart increased after his mistakes led to two of Bayern's goals in his team's 3-1 Champions League defeat by the reigning champions at Etihad Stadium last week.

But England manager Roy Hodgson has said the player is his first-choice goalkeeper for the World Cup qualifiers against Montenegro and Poland, to be played at Wembley on Friday and next Tuesday respectively.

Ruddy, who is Hart's rival for the goalkeeping spot along with Fraser Forster, has added his support, admitting he sympathised with Hart.

"I've been in situations before when people are questioning you. It's never nice," added Ruddy.

"Without being too patronising, I felt sorry for him.

"It's the way the media is. You build people up so far and then chop their legs away when they get too high.

"Unfortunately that's the way the English media goes. Until that stops we might struggle to go anywhere in competitions."

Hart's failure to stop routine shots from Bayern's Franck Ribery and Arjen Robben came a few days after he was slow to react for Andreas Weimann's winner in Villa's 3-2 Premier League win.

He was also beaten at a corner by Cardiff striker Fraizer Campbell in August and allowed a shot from James Morrison to go underneath him during England's 3-2 victory against Scotland at Wembley in August.

"Nine times out of 10 when a keeper makes a mistake, the ball goes in the back of the net," said Ruddy.

"It's a tough world but every keeper is mentally strong enough to deal with that.

"We're a strange bunch, but you have to be. The self-confidence and self-belief that you have as an individual has to be right up there."