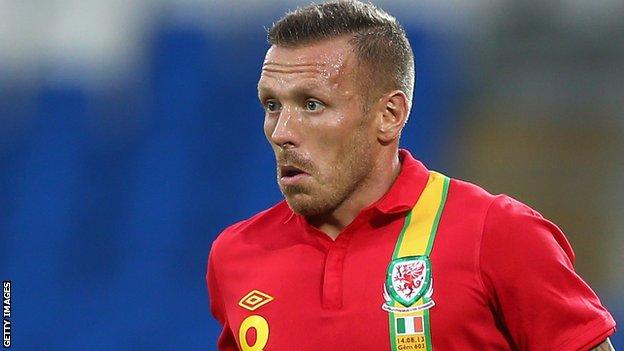 Wales forward Craig Bellamy has confirmed he is to retire from international football.

The Cardiff City player will bow out after the upcoming World Cup qualifiers against Macedonia and Belgium.

Bellamy, 34, has won 76 caps for Wales and scored 19 goals during a 15-year international career.

"Players come and go and my career has definitely come and gone," the former Coventry, Newcastle and Liverpool striker said.

"Craig Bellamy's decision is no great shock but its impact is huge.

Even his impressive statistics do not truly reflect his devotion to the cause.

As fans question the loyalty of players to their national teams, Bellamy has unfailingly shown a fierce determination to play for Wales.

He admits he's not the easiest player to get along with, but that often comes from craving perfection. He demands high standards of himself and those around him.

His international highlight was the unforgettable 2-1 win over Italy in 2002, where Bellamy scored the winner. Wales have not reached such heights since.

But as a student of the game, a management or coaching career surely beckons. One day Bellamy may wear the badge of Wales again."

"I have to do what's best for the national team and this group of players are the future. The next qualifiers, two-odd years, I'm not going to see it."

He said the current set of talented younger players gave Wales a better chance of qualification for Euro 2016.

"They have to have a better opportunity of qualifying. I have to cut myself short," he said.

And it could be his final cap if he picks up a second yellow card which would see him miss Tuesday's qualifier against Belgium in Brussels through suspension.

He was penalised the first time in Wales' 3-0 defeat by Serbia on 10 September.

Bellamy says he will not play in the friendly against Finland at Cardiff City Stadium on 16 November.

Former Wales captain Bellamy will go down as one of his country's greats. He is the third most-capped Welsh player of all time and is fifth on the all-time scorers' chart with 19 goals.

"I'm just grateful for every game I've been lucky enough to play for my country, and I really mean that," Bellamy added.

"It's an honour to play for your country at any level at any sport.

"[Playing] 70-odd times, it's been the best. Even the disappointments, even the lows, even the times I didn't want to play again because sometimes defeats can do that to you.

"Seventy-odd times having that honour like singing the anthem… it's still the best and Friday will be the best and hopefully I will get the chance to do it again on Tuesday. [It] will be hard to let go.

"My daughter will probably come out with me [before the Macedonia game] but it will probably hit me more after it... when you're watching the team."

Bellamy made his debut as an 18-year-old in a friendly against Jamaica in March 1998, replacing Gareth Taylor during the second half of a goalless draw at Ninian Park.

He scored his first international goal against Malta two months later and scored the winner in a Euro 2000 qualifier against Denmark in October 1998.

His most famous goal for Wales was the winner in the famous 2-1 victory over Italy in a Euro 2004 qualifier at the Millennium Stadium in October 2002, a game Bellamy considers his best moment in a Wales shirt.

One of his most memorable games for Wales came when he scored twice in a 5-2 win in Slovakia in September 2007, a display which then manager John Toshack described as a "scintillating performance".

His career has been dogged by on and off-field controversies including being sent off for violent conduct during Wales' defeat in Belarus in September 2000.

Bellamy, whose spell as captain of the national team was during Toshack's reign in 2007 to 2011, also represented Great Britain at the 2012 Olympic Games.

He came close to retiring from international football following the death of Wales manager and close friend Gary Speed in November 2011.

But the Cardiff-born forward, who played in Speed's memorial match against Costa Rica in February 2012, decided to prolong his international career under new manager Chris Coleman.

However the former Manchester City frontman hinted the 2014 World Cup qualifying campaign would be his international swansong.

He has even suggested he could retire from football altogether at the end of the season, when his current deal with Cardiff City expires.

Bellamy revealed in June his ambition to manage Wales and Cardiff City in the future but added he had a long way to go before stepping into management.