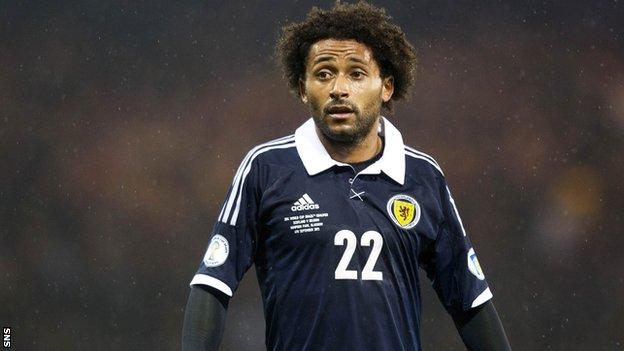 Ikechi Anya will have his thigh injury assessed when the Scotland squad gather on Wednesday for next week's World Cup qualifier with Croatia.

The 25-year-old Watford wing-back impressed on his first international start last month, scoring in the 2-1 win away to Macedonia.

Shaun Maloney and Steven Fletcher miss out through injury and Steven Whittaker is suspended.

The match at Hampden next Tuesday will bring the campaign to a close.

Scotland's chances of reaching Brazil next year fizzled out long ago, with just two wins from the nine games played.

One of those successes came in Croatia in June, with Robert Snodgrass scoring the only goal in Zagreb.

Anya, who was born in Glasgow and spent time in the lower leagues of England and Spain before his switch to Watford, made his Scotland debut as a substitute in the 2-0 loss to Belgium prior to the win in Macedonia.

He appeared as a late replacement in Watford's 2-1 victory at Huddersfield on Saturday.