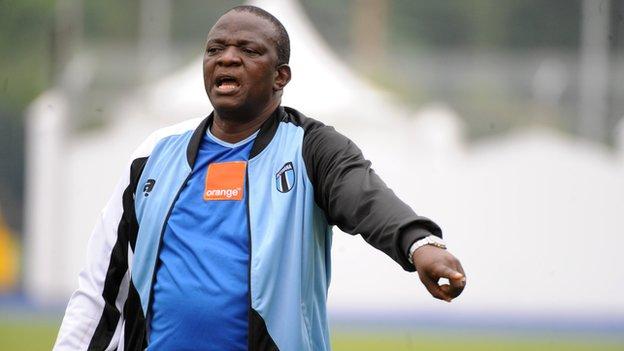 BFA president, Tebogo Sebego says the coach has been sacked for 'failing to meet the targets set for him.'

"The coach's job is performance-based and the Zebras have been doing badly over the past year," Sebego told BBC Sport.

Among Tshosane's targets were reaching the semi-finals of the Southern African regional championship the Cosafa Cup, winning at least two 2014 World Cup qualifiers and qualifying for the Africa Nations Championship (CHAN) finals.

Speculation had been building that Tshosane would lose his job after poor performances in all three events.

The Zebra's failed to get past the group stages of the Cosafa Cup and also missed out on qualifying for the CHAN finals.

The Zebras finished with seven points in 2014 World Cup qualifying but three of those came from being awarded a win over Ethiopia, who fielded an ineligible player in a match Botswana originally lost 2-1.

Tshosane confirmed receiving the letter of dismissal that indicates he will be given three months' salary.

He, however, could not comment further saying he had just come back home to rest from a Gaborone private hospital where he underwent an operation on his knee last week.

"I have put off that issue for now, I will only be able to talk about it next week," Tshosane told BBC Sport.

Tshosane had 16 months left on his contract with BFA after signing a three-year deal in April last year.

Botswana's next major matches will be in September next year when the qualifiers for the 2015 Africa Cup of Nations get underway.