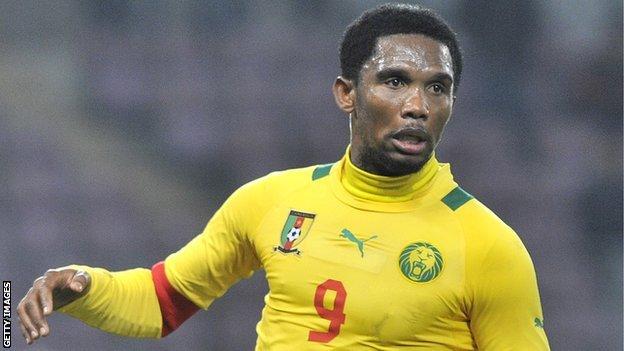 The President of Cameroon Paul Biya has persuaded Samuel Eto'o to reconsider retiring from international football.

The Chelsea striker met with representatives of the President in Yaounde to discuss the player's international future.

After the meeting Eto'o, agreed to play for Cameroon again.

He will now fly to France to join the rest of the squad, who are preparing for their 2014 World Cup play-off against Tunisia.

The 32-year-old apparently told his team-mates that he was quitting the national team moments after Cameroon beat Libya to progress to the final round of 2014 qualifiers.

Despite the reports of his retirement, the Indomitable Lions' German coach Volker Finke picked Eto'o for the squad to face Tunisia as the player himself had made no official announcement.

Eto'o has had a turbulent relationship with the Cameroon football authorities in the past, including leading a player strike in 2011 that led to the cancellation of a friendly against Algeria.

That resulted to a 15 match ban for Eto'o that was eventually reduced to eight months on appeal.

Even after the end of the suspension he refused to play for Cameroon for several months.

It is also not the first time that President Biya has stepped in to prevent a player from retiring, most famously persuading Roger Milla to return and play for Cameroon at the 1990 World Cup in Italy.