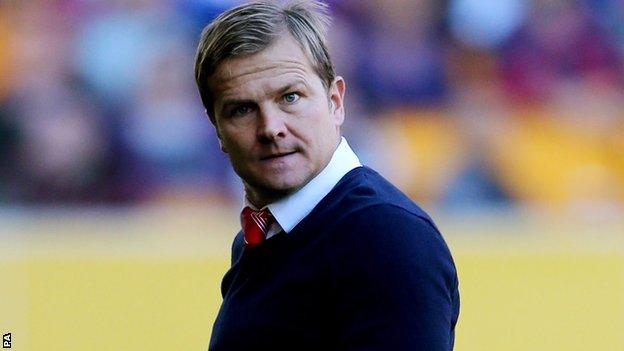 Swindon manager Mark Cooper says it is "ridiculous" he is unable to make wholesale changes to his squad for the Johnstone's Paint Trophy.

League One Town face Plymouth Argyle on Tuesday after receiving a bye into the second round.

Under Football League rules, Cooper is allowed to make only five changes to the side that started Saturday's 1-0 league win over Tranmere.

"I think it's ridiculous. If you've got a squad why can't you use it?" he said.

"If you register your squad at the start of the season you should be able to play whatever side you want but we can't."

One of Cooper's alterations will be enforced, with Nathan Thompson suspended after picking up five yellow cards.

The Town boss continued: "I would think the rule was brought in not to undervalue the competition and to make sure people play as strong a team as possible, but for me it's a grey area.

"Who's to say that the players you're bringing in are weaker? You've got an argument that if Chelsea were in, how could you say that one starting XI is stronger than the other?"

Swindon, who last week reported they had 11 players out through injury, have qualified for the area quarter-finals in four of the last five seasons, and reached the Wembley final in 2012, only to lose to Chesterfield.

Despite his concerns, Cooper said he would take the competition seriously, adding: "If you win it, it's a lot of money. It's definitely worth thinking about.

"I see every game as a chance to win and any chance to get to Wembley can't be sniffed at.

"The more games you win, the more confidence you get. If we can win, that will take us into the Rotherham game [on Saturday] full of confidence."