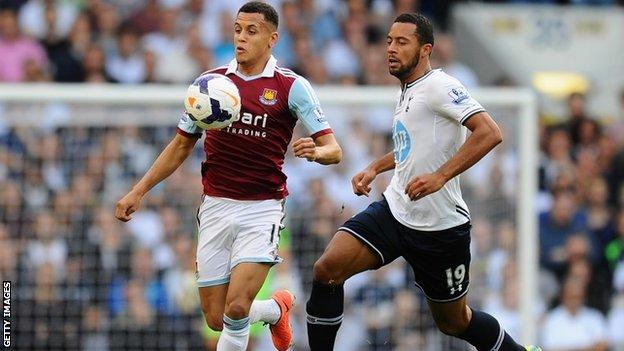 Ravel Morrison's exit from Manchester United in 2012 was the "correct thing" for both player and club, says former assistant boss Mike Phelan.

The 20-year-old midfielder, who was in trouble with the law several times at United, scored a fine goal for West Ham in Sunday's 3-0 win over Tottenham.

"He needed to get out of Manchester," Phelan told BBC Radio 5 live.

"He has gone away from the club now which I think in hindsight is the correct thing to have done."

Morrison, who has been called up for England's Under-21s, pleaded guilty to witness intimidation in February 2011 and was fined £600 three months later for throwing his girlfriend's phone through an open window during an argument.

He was also cautioned for common assault in 2008.

"It is easy to say we let our most promising player leave but is it worth the hassle to wait and maybe not see fruition to it?" asked Phelan, who is currently out of work.

Morrison left Old Trafford to join West Ham in January 2012 for a reported fee of £1m after Sir Alex Ferguson, Manchester United manager at the time, described his wage demands as "unrealistic".

But Hammers boss Sam Allardyce said on Sunday, in the wake of Morrison's solo goal against Spurs, that "the penny has dropped" and that the highly rated youngster had "sorted himself out".

Birmingham City manager Lee Clark took Morrison on loan last season and said that he was "nothing short of brilliant in terms of his application and his attitude" for most of his spell at St Andrew's.

Phelan, who left his own role at Manchester United in the wake of Ferguson stepping down at the end of the 2012-13 campaign, hopes Morrison's focus remains on his football.

"It is still a risk with Ravel, but he seems to have got his head in the right situation, his performances are decent and getting better. Hopefully he can maintain that," he said.

"At Manchester United there were other things going on which were a distraction for him and that played a part in his downfall."

Phelan revealed that despite the promise that was evident in scoring two goals in an emphatic FA Youth Cup win over Sheffield United in 2011, Morrison regularly missed training at Manchester United.

"He had a tendency to disappear for the odd day or two and then we would manage to find him and bring him back in," he said.

"It really was a day-to-day project with him. One day he was there and then another he wasn't.

"He is a nice guy when he is with you, when he is around football, but obviously there were distractions.

"At the end of the day is it too much work to put into one person and keep the harmony and the balance? That was a decision that the club had to make."