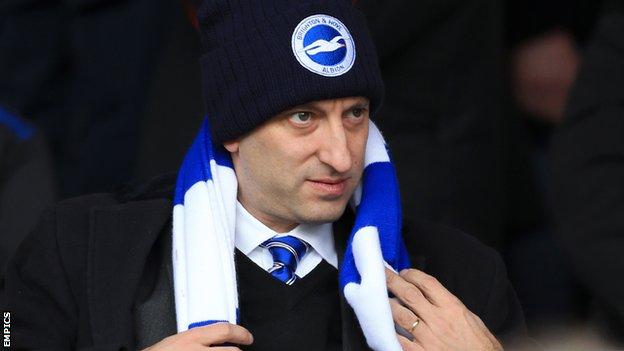 Brighton chairman Tony Bloom says the club will sign a new striker on loan by the end of the international break.

Leo Ulloa, Craig Mackail-Smith and Will Hoskins are all currently injured.

"Leo being injured is a massive blow to him and the club. The good news is we have two weeks before the next game and we are sure to get in at least one forward," Bloom told BBC Sussex.

"Our job is to get the best possible one which is available, fit and ready to go for Yeovil."

Ashley Barnes is currently Brighton's only fit senior forward, with Ulloa out for two months because of a broken bone in his foot and Mackail-Smith (Achilles) and Hoskins (knee) out long-term.

Oscar has come in but it has been really difficult for him. There was a shortened pre-season and so many key players are out injured. I think there is a lot more to come

The Seagulls had already been looking to bolster their frontline before Ulloa's injury, but Bloom says the Sussex club's activity in the transfer market is affected by the new Financial Fair Play rules.

"We knew Financial Fair Play was coming so we are well prepared for it.

"What we are not so well prepared for is so many long-term injured, although we know it can happen," he said.

"We are spending a lot of time looking at what options we have and I am confident we will get the right one, or possibly two in, before the next game."

"It's no reflection on Ashley Barnes, who is a fantastic player and does a great job for us, but Leo is a different type of forward. He gives us that little bit of a base up there to go and play off," the Irishman said.

"When we haven't got the fluid passing going that sometimes we have struggled with we can dink it up to Leo, he gets hold of it and the rest of the lads can make runs off that.

"We have got to adapt, come up with a plan B, be a bit more clever and tinker with things to adjust to that and overcome that."

Brighton are 15th in the Championship table, with 13 points from their opening 11 games.

Bloom said new head coach Oscar Garcia, who took charge following the sacking of Gus Poyet in June, had been hampered by a number of factors.

"Not only was there a shortened pre-season, with the start of the season coming early, but also so many of our key players [are] out long-term injured," he added.

"Under those circumstances he has done a really great job and I think there is a lot more to come."