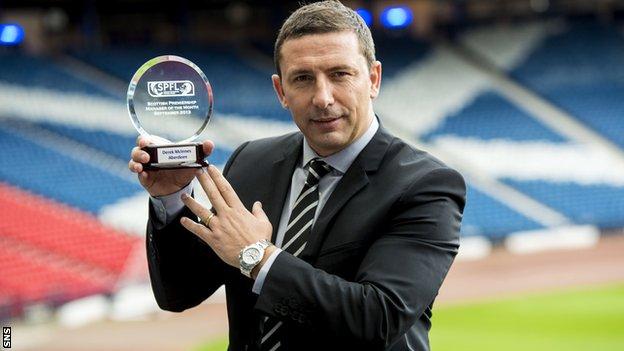 Aberdeen's Derek McInnes says much work still needs to be done despite him being named Scottish Premiership manager of the month for September.

Average attendances are up 4,000 on last season, boosted by the Dons being unbeaten during the month.

It has led to some pundits suggesting that Aberdeen are likely to finish runners-up behind Celtic.

But McInnes said it would be "foolish and naive of anyone at the club" to think they are already second best.

Indeed, while he is particularly encouraged by the development of some of the Dons' young players, he pointed out that they remain fourth in the Scottish Premiership table, five points behind second-top Inverness Caledonian Thistle.

"The potential of the club was the big attraction for me, but a lot of managers have said that before at Aberdeen recently," he said.

"There is no magic wand to make it happen. It takes hard work, getting good players in the building and finding good ways of working.

"Hopefully, given time, we can satisfy that appetite for success there is up there."

During September, Aberdeen gathered seven points from a possible nine in the league and progressed in the League Cup.

They kept three clean sheets in the process before a 1-1 draw away to St Mirren.

However, that run of good form came to an end at the weekend as they were beaten 1-0 away to Ross County.

McInnes, who is particularly keen to bring European competition back to Pittodrie, puts much of his success since replacing Craig Brown at the tail end of last season down to the closeness he has built up with his squad.

"The manager's job is so demanding in so many different aspects, but your time with the players is the most important part," he said.

"The way that Tony Docherty and I work is to try and ensure we get a closeness and a bond with the players. To make sure that when the boys come to their work, they enjoy it.

"It is important that the players get to know us and that we get to know them too. You can't be best buddies with them, but you can be close with them.

"We have got that at the minute. We have got a lot of good players at the club and a lot who have still to maximise their potential.

"It's important that Tony and I get that out of them. It's only by getting that maximum performance out of them that we will get consistent results."