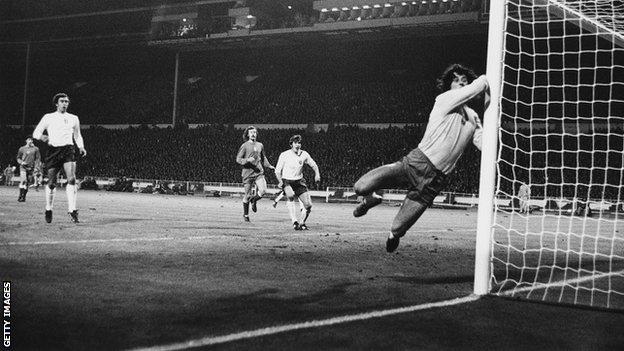 A place at Brazil 2014 might be in their own hands but England have been here before, and the omens are against them.

It is almost exactly 40 years since the Three Lions last needed to beat Poland in a make-or-break World Cup qualifier - and the man who stopped them then is back in town.

Jan Tomaszewski will be watching at Wembley on Tuesday, where he entered footballing folklore with a virtuoso, if unorthodox, goalkeeping performance on 17 October 1973.

Famously dubbed a "circus clown in gloves" by Brian Clough on TV before kick-off, his heroics helped Poland hold England in a game Sir Alf Ramsey's side needed to win to reach the 1974 World Cup finals.

None of the England team were laughing at the end of a completely one-sided match that saw them take 36 shots to Poland's two, force 26 corners, hit the woodwork twice and have four efforts cleared off the line.

But Tomaszewski has much happier memories.

"I have never watched the game again," he told BBC Sport. "But if you have a game like this, you always remember it in your heart. I can wake up in the middle of the night and remember every minute."

The build-up - win or bust

Poland had gone top of a three-team group with one game to go after beating England in a bad-tempered match in Chorzow in June and Ramsey was coming under pressure from the press.

Nobody was panicking, however. After all, England had been at every World Cup finals since they entered for the first time in 1950, had won the tournament less than eight years earlier, and had been one of the best teams at the 1970 finals in Mexico too.

"It was win or bust but I don't think anybody seriously thought England would fail," said Barry Davies, who was at Wembley commentating on the game for the BBC.

"This was still in the age when everybody felt we had an entitlement to be in the World Cup finals, and it was simply unthinkable that we wouldn't be there."

Poland boss Kazimierz Gorski thought otherwise. He knew his players saw Wembley as an impenetrable fortress and, according to Tomaszewski, used that to inspire them.

In the dressing room before kick-off, Gorski told his players: "Win against a weak team and there is no joy. You can play for 20 years and in 1,000 games and nobody will remember you. But tonight, in one game, against a team like England and at a place like this, you have the chance to put your names in the history books."

"As we walked out, the England fans shouted 'animals' at us," Tomaszewski recalled. "It was referring to our win in Chorzow. To be honest we had played very violently there."

Most of the 100,000 crowd were expecting England to get their revenge. So were some of the Poland side.

"I wasn't just afraid of England - I was terrified," Tomaszewski added. "They had beaten Austria 7-0 a month earlier and when I was in front of the royal box with the national anthems being played, I was just thinking 'I hope we are not the next Austria'."

If it was not for the exploits of the then 25-year-old LKS Lodz keeper, it might indeed have ended up being a similar scoreline. But his first eccentric save, after two minutes, was almost his last.

"I was feeling the pressure and did not notice that Allan Clarke was standing two metres away from me when I rolled the ball out," Tomaszewski explained.

"I dived at his feet to make a save but he kicked me instead of the ball and I broke five tiny bones (his metacarpals) in my left wrist, like glass.

"They were frozen during the game and the adrenaline meant I did not feel the pain. Afterwards, one of my team-mates Adam Musial told me 'it was good that he kicked you because he woke you up'."

Chance after England chance followed but, whether it was Tomaszewski's legs, arms or hands, he continued to keep the ball out, even if he dived the wrong way.

When he was beaten, the posts or a team-mate came to his rescue, and the score was goalless at the break.

Clough says keep calm and put the kettle on

Highlights of the game were being shown on BBC but the match was live on ITV and Clough, who had resigned as Derby boss just two days previously, was one of their pundits.

At half-time he refused to back down on his description of Tomaszewski, and told the nation: "Keep calm. Put the kettle on, mother. Don't worry - the goals are going to come."

Hunter's howler - but Shilton should save it

In a sense, Clough was right; a goal did arrive early in the second half. Sadly for England, it was Poland who scored it.

"I had spent quite a lot of time watching the Poles in training before the game," said veteran commentator Davies.

"I could see how they were going to play. They knew they would be under pressure but they thought they had the pace to catch England on the break."

That is exactly what happened. Norman Hunter, preferred to Bobby Moore in central defence, came across to pick up the ball on the left touchline near the halfway line but got his feet tangled up.

Robert Gadocha was left free to surge towards the area before playing in Jan Domarski, who was arriving like a train to his right, to hit a low shot that skidded past Emlyn Hughes' challenge and went under Peter Shilton's dive.

Hunter took the blame, and would describe the incident as "the worst moment of his career", but Shilton also accepted he should have done better.

"I tried to make the perfect save," he said. "Had I been more experienced, I'd have stuck a foot or knee out."

A lifeline for England

Eight minutes later, England were given a glimmer of hope.

Martin Peters burst down the right wing and went down inside the area under a challenge from Adam Musial. Peters later admitted to diving, in desperation for England's cause. It worked - Belgian referee Vital Loraux awarded a penalty.

Shilton could not bear to watch as Allan Clarke stepped up to take the spot-kick, crouching on his haunches with his back to the opposition goal.

But he had no need to worry. The Leeds striker had scored three of his nine goals for England from the spot, and a fourth was to follow.

"I was trying to read which side Clarke would shoot," said Tomaszewski. "But when the whistle went, he just came up to the ball as if he was training with kids and slotted it past me.

"He was so cool. If I could have done, I would have applauded him at the time for doing that under so much pressure."

England still needed another goal, but they could not get it.

Tomaszewski's favourite stop of a memorable night came in the last 10 minutes, again from Clarke, who turned away to celebrate in the belief he had scored the winner.

"He hit a beautiful shot and I did a blind save on my left-side," Tomaszewski explained. "I have to admit I did not save that ball, I was just in the right place at the right time and the ball bounced off me.

"England thought they had scored but they only had a corner. It was funny because when I looked up, Clarke was crouched down with his eyes wide open - he could not believe what had happened."

In the 88th minute, Ramsey belatedly made a change, sending on Kevin Hector for the ineffective Martin Chivers.

It almost worked - Hector had a header hacked off the line in the dying seconds - but Poland held on. The final score was 1-1, and England were out.

"There was a stunned silence in the stadium at the final whistle," recalled Davies. "It was more disbelief than anything else."

The aftermath - and the end for Sir Alf

Hunter trudged off the pitch looking utterly dejected, and there were more tears from several other players in a desolate England dressing room afterwards.

Meanwhile, Poland's party was just beginning, but not for Tomaszewski.

"How did I celebrate? I was the only one who didn't," he said. "The team went out all night but I was in pain with my wrist and stayed in my hotel room to take medicine.

"In the morning, I saw the newspapers and felt extremely satisfied because I was on the front pages.

"They called me the 'man who stopped England' but it was not just me. It was Gorski and the 11 people he positioned on the pitch. Against England, I made mistakes but they were not punished because of my team-mates."

Poland would go on to finish third at the 1974 World Cup, with Tomaszewski excelling.

Wembley was just the start of a golden period in Poland's footballing history, but for Ramsey it was the beginning of the end. By the time the finals started the following June, England's only World Cup-winning manager had been sacked.

Tomaszewski, who is now a 65-year-old politician, had the last laugh on his critic Clough too.

"Years later we met at the BBC in Manchester," he said. "Clough apologised for what he had said about me. We shook hands and I said thank you, because only great people can admit to mistakes."