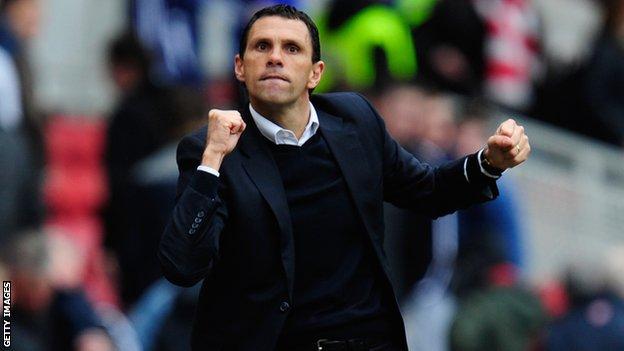 Sunderland chairman Ellis Short, as he made the final deliberations about the succession to Paolo Di Canio, knew what was riding on his decision.

"We feel the weight of the entire city and beyond, along with the history of this massive football club," wrote the American businessman in his match notes for Saturday's 2-1 defeat by Manchester United at Stadium of Light.

And now Short has passed a portion of the load to Gustavo Poyet after his appointment as Sunderland head coach on a two-year contract.

The Uruguayan will carry the burden of keeping Sunderland in the Premier League after a dismal start - not helped by some unforgiving fixtures - that has yielded only a single point from seven games and restoring calm from Di Canio's chaos.

Short has taken his time making this key move, a process no doubt brought into even sharper relief by Di Canio's 13-game reign - although that should be placed in context as Sunderland's owner remembered how "he came in and provided the fire that we needed to fight for the points necessary to stay in the league" last season.

"Gus Poyet has made no secret of his desire to manage in the Premier League and was desperate for this opportunity. He was the preferred choice of director of football Roberto De Fanti but ultimately it is owner Ellis Short who decides - and he is aware of the importance of this appointment.

"This isn't just about protecting his significant investment. Only at the weekend Short talked about feeling the weight because of the club's massive history. The pressure on Poyet is to get results but also on Short because it is his judgment that will determine the club's future."

There is, however, another element of a gamble in the appointment of the 45-year-old former Brighton manager, who left them in acrimonious and bitter circumstances after reaching the Championship play-offs last season.

Indeed, when Short described Poyet as a "passionate, driven" man, those very words have echoes of his ill-fated appointment of Di Canio.

Like Di Canio, Poyet has no previous experience of Premier League management and the conclusion of his time at Brighton - the full reasons behind his sacking have yet to be revealed - has already brought comparisons with the confrontational style of his predecessor.

Short has ignored the stability that would have been offered by retaining interim head coach Kevin Ball by entrusting the job to Poyet.

Ball presided over a very obvious improvement in performances, even in defeat against Liverpool and Manchester United. He would have been the safe choice in many eyes.

Short also ignored the claims of British managers such as Tony Pulis and Steve McClaren, with Poyet crucially having the support of director of football Roberto De Fanti.

In Poyet, he has the sort of young manager who has served an apprenticeship and will be able to focus on footballing affairs while the influential De Fanti concentrates on the wider strategy.

Poyet served as assistant to Dennis Wise at Swindon Town and Leeds United before working alongside Juande Ramos at former club Tottenham. He will feel his time has come.

Having watched Poyet's Brighton on several occasions, he produced a bright attacking side and was also someone who was nakedly ambitious about his desire to reach and succeed in the Premier League, either with the Seagulls or without them.

Poyet's achievements at Brighton have been somewhat overshadowed by the manner of his departure but his stock was rising steadily with his work at Amex Stadium and he was inspirational enough to get them into the shake-up for a place in the Premier League.

This is what Short will have been looking at, rather than his lack of Premier League pedigree, when he settled on Poyet.

And Poyet made no secret of his wish to get his hands on the levers at Sunderland once Di Canio was sacked. He believes this restoration job is perfect for him.

Now he must patch together a Sunderland squad still effectively getting acquainted with each other after the arrival of 14 signings this summer, let alone with the fight they have to stay in the Premier League.

There were signs that Poyet will have something to work with in Sunderland's last two games under Ball but he still faces a huge task in somehow bolting the commune of summer newcomers on to some of the older inhabitants such as John O'Shea to get Sunderland out of trouble.

And one of his first wishes will be to have Scotland striker Steven Fletcher back in action as quickly as possible after his shoulder injury.

The stakes are almost as high for Short as they are for Sunderland. He has put his reputation on the line by going for Poyet - accompanied by the same sort of optimistic noises that greeted Di Canio's arrival.

It is understandable he feels the weight of history. Even in their current struggles, 45,426 turned up at Stadium of Light on Saturday for Manchester United's visit. The potential (and expectation) at Sunderland is huge and it is a big call for Short to give the task of realising it to a man who has never taken charge of a team in the Premier League.

How Poyet fares will be a measure of Short's judgement because he - and Sunderland - cannot afford to get it wrong again.