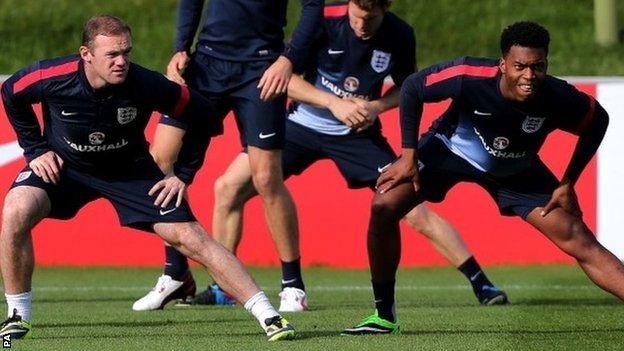 Both were missing for the 0-0 draw in Ukraine, but return for the double-header against Montenegro and Poland.

"Sturridge is the best striker in the league this season," Wilshere said of the Liverpool forward, who is the top-scorer in the Premier League so far.

They are two of five forwards in the squad selected by coach Roy Hodgson for the matches against Montenegro on Friday and Poland next Tuesday.

The Arsenal midfielder is confident England have the required firepower to win the remaining fixtures - which would guarantee qualification for Brazil.

"Rickie Lambert [of Southampton] has done a great job," the 21-year-old added.

"He scored a couple [against Scotland and Moldova] and did well in Ukraine which was a difficult place to go. To be up there on your own and do the job he did, he did really well.

"We have got [Tottenham's Jermain] Defoe who can score from any position and [Manchester United's] Danny Welbeck as well who is looking sharp. We have got a good mix there and it can only be helpful for us."

Another potential source of goals could be left-back Leighton Baines, who scored two superb superb free-kicks in the same match against West Ham recently and is favourite to replace the injured Ashley Cole against Montenegro.

"I am sure he won't let us down," England defender Phil Jagielka said of his club-mate.

"He is a good defender and he gives us another attacking threat down the left flank as well."

England go into Friday's penultimate qualifier against Montenegro at Wembley unbeaten, having won four of their eight matches so far.

"It's nice to be unbeaten but we can still be unbeaten and not go to the World Cup," Wilshere added.

"We don't want that. We have got two big games ahead of us and we need to focus. We will look at Montenegro and look at their strengths."

A Guardian report in August revealed that the opening weekend of Premier League fixtures this season marked an all-time low in terms of the number of Englishmen starting games.

However, the Gunners midfielder believes foreign players are not affecting first-team opportunities for English players in the Premier League.

"If you look in the Premier League, [West Ham midfielder] Ravel Morrison has burst onto the scene. It is not just him, there are a lot of English players breaking into teams.

"I learn from the top foreign players at Arsenal. It only helps my game playing with top European players.

"If you are good enough, it does not matter where you come from."