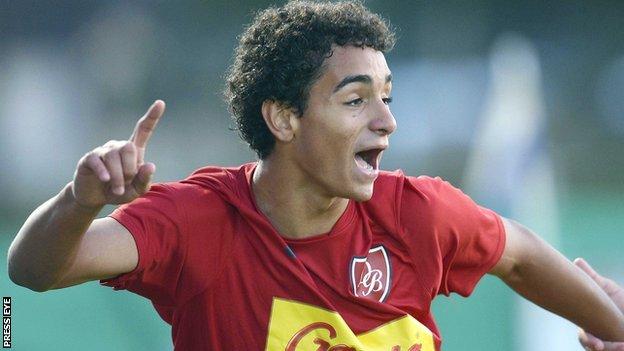 He is the new Brazilian superstar-in-waiting and wanted by Manchester United, Real Madrid, Sao Paulo and Udinese.

His name is Bruno Gomes, he is 17 and the striker has scored 122 goals in three years with Desportivo Brasil. He is, it seems, set to move on.

But while there is nothing new about a player leaving a South American club for riches elsewhere, there is something very different about this story.

Sao Paulo, Flamengo, Corinthians and Santos might be household names, clubs famous in Brazil and beyond, but might not have heard of Desportivo Brasil.

Yet they are becoming one of the most talked about football clubs in South America, despite not having a team playing in the Brazilian championship.

During the Confederations Cup in Brazil last summer, I travelled to Porto Feliz, a largely featureless town almost three hours drive from Sao Paulo, to find out what they are all about.

There is nothing exceptional about it, apart from Desportivo Brasil.

The people who run Desportivo are certainly not shy. Formed in 2005, they claim to be the premier academy for young Brazilian footballers; to be a place where, from the age of 14, the cream of the country's young players live, sleep and dream football.

Desportivo Brasil's business is finding talent, nurturing it and selling it abroad to hungry European superpowers desperate for the next Neymar.

When you consider that there are estimated to be 10,000 Brazilian footballers playing professionally around the world, you can see why Desportivo are being talked about, why they are busy and getting busier.

The first thing you notice after passing through the electric gates and walking into reception is a signed Manchester United shirt. Proudly framed it hangs over the welcome desk.

Building an academy doesn't come cheap, and Desportivo have a handful of 'partner' clubs around the world; Manchester United is one of them. Nike provide the kit and the training equipment, as well as a corporate tick on every bedroom door in the modest dormitory where the boys share rooms.

Running the Desportivo operation is director Rodolfo Canevasi. Under the high-vaulted ceiling of his office and overlooking the indoor swimming pool, he shows me some of the many trophies squeezed into an almost-too-small cabinet.

"This was won in Northern Ireland in 2012." he says. "The Milk Cup. We came from Brazil to Europe and won one of the most important tournaments for young players in the world."

They won alright; won all five games scoring 22 goals and conceding only three; defeating Newcastle 3-0 in the final having already put six without reply past Portuguese side Benfica.

"Desportivo is owned by a group called Traffic, which is the major sports marketing company in Latin America.

"We have to find our boys by the age of 10, 11 or 12. Brazilian law says they can't move here until they are 14, so we bring these boys and their families to show them the project and that we're best when the time comes."

"We take a 14-year-old boy out of his family and we give back a boy at 18 or 19 who is ready for life. We give them classes, we teach them English, we have a psychologist to prepare them for success, for life abroad; or for injuries and failure."

So where do Manchester United come in?

"We have a contract with Manchester United," he added. "We share the development of some young kids together and every 15 days United's Brazilian-based coach comes here, and twice a year they go to Manchester to spend time there.

"If the player is good enough then United, for a certain time, has the first option to buy that player. Not of every player here, but certain players; the ones we developed together, not more than three or four boys. Bruno Gomes is one."

When Desportivo sell a player, it is conducted like a normal transfer between clubs.

"Of course, we always try to keep a share in the player to ensure that if he is sold again we still have profit to come," added Canevasi. "Some of that money goes back to the stakeholders - but the more profit there is, the more we can invest here."

Without first-team wages or stadium overheads, those profits could be huge.

Outside a bus arrives bringing the youth team of a local Sao Paulo state club to play against Desportivo's under-15 team. If they are lambs to the slaughter then they are big lambs, towering over the young Desportivo boys.

Desportivo's under-15 coach Anderson explains the size difference: "This visiting team are under-16s. It's good for our boys to player older teams; it's tougher for them."

Not that tough though - after half an hour Desportivo lead 3-0. With two goals and one assist there is one player in particular who stands out. "Ah, that's Heitor," says a glowing Anderson. "Our next Bruno Gomes!"

I'm introduced to Filipe de Luca, he is a 15-year-old midfielder, speaks good English and is both shy and polite.

"My dream is to play in Europe, to play with the great players, maybe for Paris St-Germain," he says. "I hope to be like Oscar, but my model at Desportivo is Bruno Gomes; he is so good, the best I have ever seen, better than Wayne Rooney."

Later I ask Rodolfo about Filipe de Luca and ask if he could really be like Oscar. Rodolfo smiles: "Now Filipe is very interesting, a fantastic prospect, and with an Italian passport, which will help. Like Oscar? Maybe, though maybe better. Maybe Kaka."

I laugh. Rodolfo does not and I suddenly realise that he's not joking.