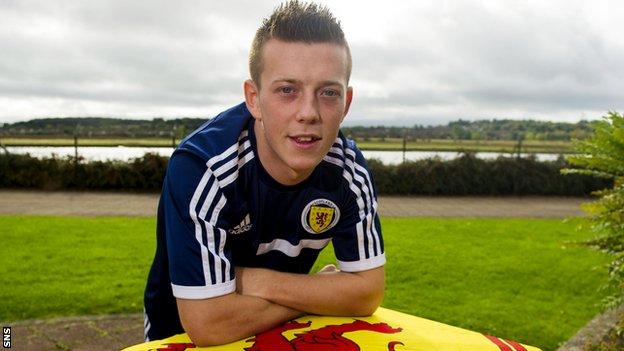 Callum McGregor hopes to make an instant impact for Scotland Under-21s - just like he did for Notts County after moving on loan from Celtic.

The 20-year-old midfielder scored on his debut for the Magpies in August.

"If I start - great! If I have to come off the bench then fine, but because I've done so well recently then hopefully I will start," he said.

McGregor, who has played at under-15 through to under-19 level for Scotland, was included in a previous under-21 squad but had to pull out as he required a hip operation.

Fit again after surgery, the midfielder hopes to do for Scotland what he did for Notts County when scoring a debut goal and claiming an assist as they

"I've scored six in 12 games in all competitions, so it's been a good start," McGregor told BBC Scotland.

"I just felt I was at that point in my career where I had to go and play games.

"I played in a pre-season game for Celtic against Brentford and scored and someone from Notts County was watching.

"They phoned the gaffer and asked to take me on loan.

"I spoke to the gaffer about it and we decided it'd be best to go and get some first-team games and gain experience and learn the game a wee bit.

"Hopefully, I can continue that by keeping working hard every day and start learning new things and put them into place in the game.

"I've improved massively by applying myself in training and listening and learning."

McGregor admits he has noticed a remarkable difference playing in England's League One with County compared to playing with the youths at Celtic.

"It's a lot more competitive and physical and, if you want to play down there, you have to toughen up and handle it," he said.

"At the youth level, you're always in control of the game playing for Celtic, because teams come and sit in against you.

"So it's a lot more competitive and it's man's football because obviously there's points at stake."

McGregor's loan period is due to expire in January and he does not know what the next stage of his career will hold.

"I'm not sure what will happen," he admitted. "I've not really spoken about that.

"I'm just enjoying my football at the moment and scoring goals, so I'm just happy from that side of it."