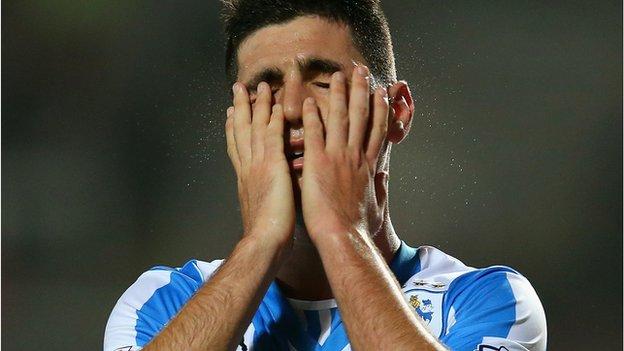 Shrewsbury Town have completed the signing of striker Cristian Lopez from Championship side Huddersfield Town on a month's loan.

The 24-year-old, previously a reserve-team regular at both Valencia and Real Madrid, only joined the Terriers this summer on an initial one-year deal after impressing as a trialist.

"It is an important opportunity to play," Lopez told BBC Radio Shropshire.

"I like English football. It is good. And I want to play here."

Lopez, a free agent when he left Spanish third tier side Atletico Baleares at the end of last season, has made just one Capital One Cup appearance for Mark Robins' Huddersfield.

"There is a certain standard of player we want to bring in because we want them to go straight into the first team," said Turner.

Lopez now looks likely to partner Town's five-goal top scorer Tom Bradshaw, who has put club over country by pulling out of Wales Under-21 duty.

Following the return of Town's last two young loan strikers, Curtis Main (Middlesbrough) and Graham Burke (Aston Villa), Turner's only other attacking option is summer signing John Marsden, now fit after missing the start of the season with a broken foot, but still to make his debut.

"The month for Curtis was always a month," added Turner. "There would have been further discussions had either party wanted to continue with it, but the month was up.

"Graham Burke obviously wasn't playing a lot of football for us.

"He's an outstanding talent and he could well go on to have a very good career in football.

"But I just felt when you looked at the physical contact in the game against Bradford, his last game with us, I just felt another 12 months of development football would do him the power of good."