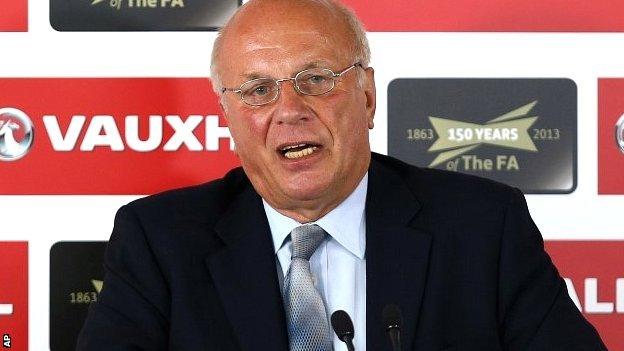 The Premier League has turned down a role on the commission to improve the England team, says Football Association chairman Greg Dyke.

The Premier League feels it needs more than one voice on the panel to reflect its members' views and will offer help without being fully involved.

Former England manager Glenn Hoddle will be on the commission with other members announced later on Wednesday.

Where is the next generation?

English under-21s* made up 2.28% of the total minutes played in 2012-13 with Chelsea, Manchester City, Stoke, Swansea and Wigan failing to field an English player under 21 all season.

* refers to players born in the country or who have moved to the country for non-football reasons.

"I disagree, but can understand," Dyke said of the Premier League's stance.

The commission - which will consider how to increase the number of England-qualified players appearing for the country's top clubs - is expected to include former players, FA board members, representatives from the Professional Footballers' Association (PFA) and the League Managers Association (LMA).

It is understood Premier League chairman Anthony Fry was invited to take up a role but tuned down the offer because of concerns over the make-up of the rest of the panel.

David Bernstein - Dyke's predecessor as FA chairman - gave his backing to Hoddle's inclusion but said it would be "incredible to have a meaningful commission" without representatives from England's top flight.

He told BBC Radio 5 live: "I don't know Glenn Hoddle personally but clearly he's a real man of football and he's got great football knowledge and I'm sure he'll be helpful."

"If we're looking at a commission for the greater, wider good of English football then all parties need to be involved."

Speaking at the Leaders in Football conference at Stamford Bridge, Dyke said: "The Premier League were very helpful and will help all they can but didn't want to be on commission itself."

Dyke, who took up the FA post in July, used his first major speech in July to set the national team targets of reaching the semi-finals of Euro 2020 and winning the World Cup in 2022.

Brentford: His seven-year stint as non-executive chairman with the League One club came to an end when he took up his role at the FA in July.

"It cannot be our fault on any level."

Dyke also said he wants it to be easier to take retrospective action for on-pitch incidents, such as Chelsea striker Fernando Torres's scratch on Tottenham defender Jan Vertonghen during September's league match between the two sides.

The FA has increased its power to punish incidents that escape the officials's notice at the time, but Dyke admits being confused by Torres escaping further sanction - with the governing body stating it had been seen by an official "albeit not in its entirety".

"It is understandably baffling to everyone and must be addressed," said Dyke. "As FA chairman I don't like being in a position where I can't explain why we can't take action."