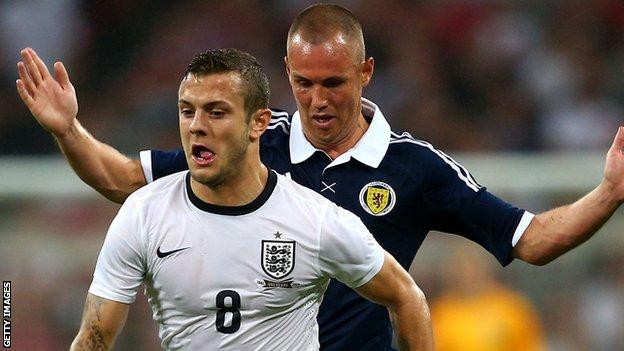 Only English people should play football for England, midfielder Jack Wilshere has said.

Manchester United's Adnan Januzaj could play for England from 2018 under Fifa's five-year residency requirement, as he has yet to commit to another country.

Midfielder Januzaj, 18, is eligible for Belgium, Serbia, Albania and Turkey.

But, asked about the issue, Arsenal and England midfielder Wilshere said: "If you live in England for five years it doesn't make you English."

We have lots of boys in our squad who were not born here, whose families have fled here

The 21-year-old added: "We have to remember what we are. We are English. We tackle hard, are tough on the pitch and are hard to beat.

"The only people who should play for England are English people. If I went to Spain and lived there for five years, I'm not going to play for Spain."

Later on Wednesday, the 21-year-old Arsenal player took to Twitter to say his comments had not been about Januzaj.

"I wasn't referring to Januzaj," he said. "The question was should foreign players be allowed to play for England, and in my opinion I don't think they should. He is a great player. I wish he was English."

Januzaj, who joined United in 2011 from Belgian club Anderlecht for a reported fee of nearly £300,000, was born in Brussels.

He has turned down the advances of Belgium, and has not won a cap at any level for any country.

World governing body Fifa's rules state that a player is eligible to play for a country if "he has lived continuously for at least five years after reaching the age of 18 on the territory of the relevant association".

That would mean Januzaj would have to wait until 2018 to represent England, assuming he remains in the country until he turns 23. England boss Roy Hodgson has confirmed he has been monitoring the player.

The England Under-21 set-up currently includes Liverpool's Raheem Sterling, born in Jamaica, and Wilfried Zaha of Manchester United, born in Ivory Coast, along with West Brom's Saido Berahino, who left war-torn Burundi as a 10-year-old.

"It's a difficult one," said England Under-21 coach Gareth Southgate. "[Januzaj] has not played for anyone else.

"We have lots of boys in our squad who were not born here, whose families have fled here. There are some wonderful stories and they are all incredibly proud to play for England.

"I'm torn with it. The world is changing. People move and work abroad. It is important to know why someone wants to play for you."

Former Football Association chairman David Bernstein said England must "play within the rules and get the best team we can".

He told BBC Radio 5 live: "There is much more fluidity in terms of population movement.

"I would say we must play within the rules but if players are eligible, I would be inclined to pick the best players we can get. Other countries do that."

FA chairman Greg Dyke said: "It is an issue we need to look at. We [the FA] will discuss our policy again."

Former England midfielder Chris Waddle told BBC Sport: "I've always believed if you're born in a country you should play for your country.

"But maybe somebody comes here when they're young and by the time they are 20 they are eligible to play. To him it's probably home - why not?"

He told BBC Sport: "I am of the opinion that to be English you should be born in England. Maybe with the state of English football we haven't got enough world-class players.

"Januzaj looks a fantastic young talent. But just because you've lived in England for five years that doesn't mean you can play for the national team."

Cricketers Kevin Pietersen, Matt Prior and Jonathan Trott play for England despite being born in South Africa.

And Pietersen responded to Wilshere's comments on Twitter by asking the Arsenal player: "Interested to know how you define foreigner...? Would that include me, [former England cricket captain Andrew] Strauss, Trott, Prior, [golfer] Justin Rose, [cyclist Chris] Froome, Mo Farah?

"Same difference.. It's about representing your country! IN ANY SPORT!"

Southgate added: "We seem to have embraced the cricket team that has won the Ashes, but it is a really interesting, philosophical debate."