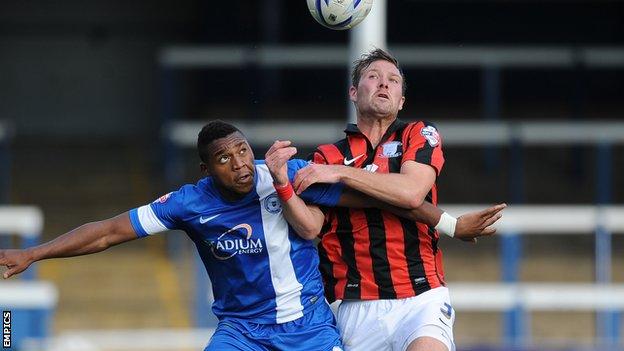 Defender Scott Laird believes successive defeats against Peterborough and Oldham could be the wake-up call that Preston North End needed.

Their on Saturday, before losing at Deepdale for the first time in the Football League Trophy on Tuesday.

"Maybe it's a blessing in disguise and maybe it will give us a good kick up the backside," said Laird, 25.

"We've got to put it right on Saturday against a good Crewe side."

Preston's Simon Grayson was named League One's manager of the month after his side won all four of their league fixtures in September.

Since collecting the award, the Lilywhites have lost both of the matches they have played.

The Alex, who in midweek, are struggling near the foot of the third tier, while Preston lie fifth in the table.

"They [Crewe] haven't had the best of starts and they're going to want to prove a point, but so are we," added former Stevenage full-back Laird. "We've had two defeats on the bounce and we've got to come back fighting to prove we're good enough to be up at that upper end of the table."

A 2-0 reverse against the Latics ended any hopes of a trip to Wembley in March, with the damage done inside the first 10 minutes.

Danny Philliskirk put Oldham in front after just 16 seconds, before James Wesolowski doubled the lead in the early stages as Lee Johnson's men avenged their

"You can't give anyone a two-goal head start, and a one-goal start after 15 seconds," Laird told BBC Radio Lancashire.

"We switched off and they punished us, like any team in this league will do. It's a very good league and Oldham are a very good team."